The Business of Guitar Hero 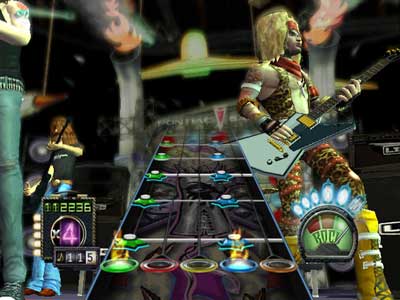 The Guitar Hero franchise is big business, raking in $1 billion in global sales since its first release in 2005 [source: Brandweek]. In 2007, "Guitar Hero III: Legends of Rock" and "Guitar Hero II" claimed the first and sixth slot on the top-10 best-selling video games of the year, respectively [source: Caulfield]. And with "Guitar Hero: Aerosmith" slated for a June 2008 release, the franchise will likely keep riding high.

But the money doesn't stop flowing once people have dropped $100 for the game and controller. Fans can buy interchangeable faceplates, storage bags and straps for their controllers from RedOctane's online store. Not to mention the swarm of third-party Guitar Hero accessory manufacturers pumping out t-shirts, miniature controllers and amplifiers.

When "Legends of Rock" masters yearn for new challenges, PlayStation and Xbox owners can also purchase downloadable track packs of three songs for about $6. Likewise, Guitar Hero has lent welcome relief to the music industry, herding in new and younger fans to guitar-based music. According to the American Society of Composers, Authors and Publishers (ASCAP), 40 percent of core gamers between 13 and 32 years old learn about new music from video game tracks [source: ASCAP Playback]. Of that group, a third bought the artist's tunes as a result. In addition, the flat rate for licensing master tracks runs anywhere from $2,500 to more than $20,000 [source: ASCAP]. Even Slash of Velvet Revolver has jumped on the marketing train, starring in the game for an undisclosed sum, along with Tom Morello of Rage Against the Machine and Bret Michaels of Poison.

A study performed by ArsTechnica found songs on the "Legends of Rock" track list experienced as much as 140 percent sales bump following the game's release [source: Kuchera]. New bands also benefit from the widespread exposure. British metal group DragonForce, for instance, has enjoyed a tripling of album sales, thanks to their finger-numbing "Through the Fire and Flames," which has become the arch nemesis of many a "Legend of Rock" aficionado [source: Browne].

­On the corporate side, in-game product placement has also spread around the wealth. The Gibson guitar brand had always been plastered throughout the game, but "Guitar Hero III" took the cross-marketing to new heights. Some performances take place in the Pontiac Garage venue where Red Bull cans litter some stages and billboards advertise Axe Body Spray behind the rocking avatars. Indeed, the sponsors for Legends of Rock include 18 companies listed in the credits section of the instruction manual. Fans can likely expect a boost in this not-so-subtle advertising since Activision inked a deal in early 2008 with Microsoft's video game advertising company, Massive.

But amid the marketing and profit margins, the beat goes on for Guitar Hero fans. Up next, meet the players who rock the hardest and the culture their feats have helped spawn.