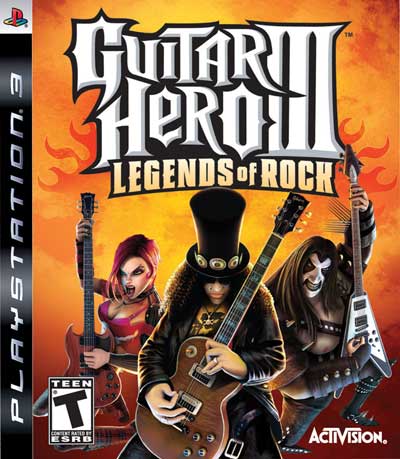 Slash from Velvet Revolver stars in "Guitar Hero III: Legends of Rock," developed by Neversoft and published by Activision.
Activision

The Guitar Hero franchise has accomplished much in a short time. With the first version dropping in November 2005, the franchise is set to release the fifth installation, "Guitar Hero: Aerosmith," in June 2008 [source: Activision].

Although most attribute the idea for Guitar Hero to the brothers Kai and Charles Huang, founders of the video game company RedOctane, its concept traces back a few years earlier to another gaming company called Konami. Konami has developed popular games such as Dance Dance Revolution and Frogger. In 2002, it filed a patent that outlined games called GuitarFreaks and DrumMania that follow the same premise as Guitar Hero, including a similar guitar-shaped controller [source: Yoshitomi et al]. Now the patents listed on the "Guitar Hero III: Legends of Rock" packaging indicate that Activision and RedOctane have licensed at least two of those earlier Konami patents [source: Gamesutra].

For anyone who has played the first Guitar Hero, the game has come a long a way. "Guitar Hero I" is limited to the PlayStation 2 platform and only offers 30 songs, all of which are covers because of the high price of licensing original masters. In contrast, "Guitar Hero II" contains a 70-song catalogue with PlayStation 2 and Xbox compatibility. But once the franchise took off and profits skyrocketed, the Harmonix and RedOctane marriage split.

In May 2006, video game publishing giant Activision purchased RedOctane for $100 million. A few months later in September, MTV paid $175 million for Harmonix. Since RedOctane took the Guitar Hero publishing rights with it to Activision, many Guitar Hero purists were upset to learn that development company Neversoft, not Harmonix, would create "Guitar Hero III: Legends of Rock." Fans flooded online message boards with angry emoticons, bemoaning the Neversoft move in the same way that people react to big box retail stores closing out mom-and-pop businesses. Neversoft is owned by Activision and worked on high-profile games, such as the Tony Hawk skateboarding series. Harmonix, on the other hand, was a smaller operation that focused on music and rhythm-related games.

Nevertheless, Activision released "Guitar Hero III: Legends of Rock" for all major gaming platforms (PlayStation 2, PlayStation 3, Xbox, Wii) on Oct. 28, 2007. Despite some complaints about its more corporate feel and added difficulty, the game sold like hot cakes. In fewer than three months, "Legends of Rock" became the top-selling video game of 2007, with 5.9 million units gobbled up [source: Caulfield].

And has this evolution taken Guitar Hero from ape to man? Let's just say you'd better have your opposable thumbs primed to hang on to your axe while your fingers fly across more responsive fret buttons to faster solos. Aside from the facelift and amped set list, other notable "Legends of Rock" features include:

Up next, we'll take a closer look at where the Guitar Hero franchise stands today as a business and how its effect has spread to other markets like a song in the wind.