Getting Started with Guitar Hero 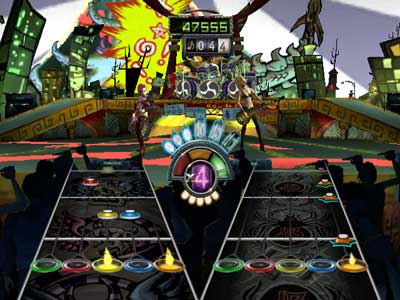 Play simultaneously with a friend in co-op mode to become rock stars together.
Activision

Before you start playing Guitar Hero, you must decide whether you want an open mic night or sold-out arena level of intensity. In the latest Guitar Hero release, "Guitar Hero III: Legends of Rock," you have five game mode options. Each offers different opportunities and environments to allow you to build your skills, show off against friends or climb your way to the top.

Next, it's time to determine how close you'll stand to the rock 'n' roll fire. The four difficulty levels are separated by the speed and number of notes thrown at you during a song. If you're just starting out, don't even think about trying anything but the easy level to get the hang of it.

Whether it's Mick Jagger's snarl or Gene Simmons' blood-spitting, onstage persona is everything. For that reason, Guitar Hero has a variety of characters, or avatars, to choose from. Match your riffing style with Johnny Napalm's mohawk, Judy Nails' vixen vibe or one of the other seven "Guitar Hero III: Legends of Rock" characters (not including the one you can unlock). Also, if you dig Izzy Sparks' mullet, but not his pants, don't fret. As you progress in career mode, you can buy your avatars new clothing and instruments.

Now that you've established your virtual set list and band, it's time to play. Read on to learn Guitar Hero's essential rules for scoring.