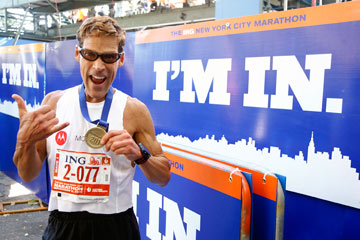 Dean Karnazes puts the MOTOACTV through its paces by wearing it during a marathon.
© 2012 Motorola Mobility

Being an active geek is a challenge. It's not that we're necessarily sedentary creatures. It's that we techno geeks really like to have a lot of options at our fingertips whenever we do anything. Whether we're firing up one of our video-game consoles or going for a 5-kilometer (3.1-mile) run, we want every option available.

But carrying the gear that gives us those options gets cumbersome. Smartphones, pedometers, watches, MP3 players and more can weigh us down until it looks like Robocop is training for a half marathon. Recently, several companies have waded into the fitness market with some high-tech gear designed to streamline your workout routines while giving you the information you need to fine tune your activities. Motorola is one of those companies and its product is called MOTOACTV.

At first glance, the MOTOACTV looks like an oversized digital watch -- you can even wear it on a wrist strap as a watch if you like. It's 46 millimeters square -- that's about 1.8 inches to a side. It's just 9.6 millimeters thick, which is less than half an inch. And this watch is a bit more sophisticated than your average timepiece. It's also an MP3 player, a GPS device, a Bluetooth gadget and an activity tracker.

The MOTOACTV contains sensors that help it determine the intensity and effectiveness of your workouts. It can also pair with heart-rate monitors, bicycle computers and other sensors to give you more information about how your body responds to activities. And an online component gathers data, processes it and presents you with the information in a way that's easy to understand.

Basically, the MOTOACTV is a computer. If you were to crack one open, you'd find a circuit board with several chips soldered to it. These chips give the MOTOACTV its functionality.

The brain of the gadget is a 600-megahertz processor. That processor speed would look pretty puny on a desktop computer label. But the MOTOACTV has a limited set of functions that the processor can handle just fine. Whether it's playing a music track to get your heart pumping or recording each time your heart pumps, the processor takes care of business.

There are two models of the MOTOACTV, but the only difference is the amount of memory each one has. The base model has 8 gigabytes of memory. The premium model doubles that to 16 gigabytes. In both models, the memory comes in the form of a flash memory solid-state chip.

Also inside the MOTOACTV is a GPS receiver. It can detect the presence of GPS signals and use that information to pinpoint your location. It does this by using trilateration. The receiver compares data from different satellites -- each satellite broadcasts its location with a time stamp. The receiver calculates how far away you are from the satellite based on how long it took the signal to get to you. By combining that data with the information sent from at least two other satellites, the receiver can determine where on the surface of the Earth you are within a few feet.

The MOTOACTV has an accelerometer inside it. The accelerometer's job is to detect changes in velocity. Velocity is speed and direction. If either speed or direction changes, the accelerometer detects it. While Motorola hasn't released information on the specific type of accelerometer used in the MOTOACTV, it's a good bet that it's a micro-electromechanical systems (MEMS) sensor.

While that sounds like the sort of technobabble you'd get on an episode of "Star Trek," breaking down the word makes it relatively easy to understand. Micro is easy -- it means small. Electro means that there's an electrical component to the sensor. And the mechanical part means there's a part inside the sensor that actually moves. This moving part is small -- sometimes only a few hundred microns long and less than a dozen microns wide.

The MOTOACTV processor takes the information from the MEMS sensor and interprets the changes in capacitance as motion. After calibrating the MOTOACTV to your personal stride, it can keep track of how many steps you take.

In 2011, Google announced that it intended to acquire Motorola Mobility. The two companies have worked together on products for several years, and the MOTOACTV is another example of this partnership. It uses a version of the Android mobile operating system developed by Google. The MOTOACTV depends upon a modified version of Android 2.3, also known as Gingerbread.

The MOTOACTV contains a chip that allows it to receive and transmit signals over WiFi and wireless networks. It can also receive FM radio signals. You can pair a MOTOACTV device with other gadgets via Bluetooth or ANT, both of which are wireless protocols. Both are ideal for devices like MOTOACTV -- they require very little power because they only transmit small amounts of data at a low rate. That's a problem if you're trying to watch a high-definition video, but it's ideal for transmitting data collected from a sensor.

The MOTOACTV can also connect with a secure WiFi hotspot. To do this, you must first connect the MOTOACTV to a computer using a micro USB cable. Using your computer, you select the appropriate wireless network and enter the password to let your MOTOACTV communicate over WiFi. After you've set up your device, it will send data collected from your workouts to motoactv.com automatically whenever it detects your wireless network.

As for the user interface, it's all touch-based. The MOTOACTV has a capacitive touch LCD screen. That means a weak electrical charge propagates across the screen. When a conductive material -- like your finger -- makes contact with the screen, it changes the capacitance and the device registers a touch. You don't have to push against the screen the way you would with a resistive touch-screen interface. But there's a downside -- if you're wearing normal gloves or mittens, you won't be able to navigate the menus unless you resort to using your nose as an input device. If you'll be using your MOTOACTV outdoors in wintertime, it might be worth investing in a pair of gloves with capacitive material in the fingertips.

It didn't take long for someone gain administrator-level access to a MOTOACTV. It's called rooting and it lets you modify your device. A rooted MOTOACTV can run many Android apps just like a smartphone!

Using Bluetooth or ANT, you can pair the MOTOACTV with other devices. If you own an Android smartphone, you can use Bluetooth to create a connection between your phone and MOTOACTV. Incoming calls and text messages will display on your MOTOACTV's screen. If you have a headset connected to the MOTOACTV you can even accept calls through the device, just the feature for your average Dick Tracy on the run.

You can also pair up special sensors designed to keep track of your activities. This can include a heart monitor, which measures how fast your heart beats, or a GARMIN Foot Pod, which tracks how far and fast you travel as well as the length of your stride. The choices aren't unlimited -- Motorola has partnered with a few companies to provide support for specific sensors.

The MOTOACTV at Work 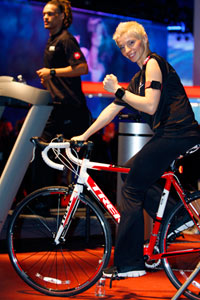 The technology inside the MOTOACTV is cool, but what may be even more interesting is what the device does with all that data it collects. You can select the type of workout you're going to do on a workout menu. Supported workouts include running, walking, cycling and using an elliptical machine. You can also designate whether you'll be exercising outside or indoors. For indoor exercises, a little extra calibration is necessary, because the MOTOACTV won't be able to rely on GPS signals to keep track of how you're doing.

Once you're ready to go, you just wear the MOTOACTV -- or mount it on your bicycle -- and take off. You touch the screen when you're finished. The next time you come into range of your wireless network, the MOTOACTV will send the data through to a personalized profile account that you can access through a Web browser. Motorola's servers crunch the data and send back results in a format that's easy to interpret.

The type of data saved to your profile will depend upon which, if any, sensors you're wearing in addition to the MOTOACTV. For example, if you're wearing a heart-rate monitor, the MOTOACTV will record how hard your heart was pumping during your workout. You can set a target range for heartbeats per minute as a goal and measure your workout against what you want to achieve.

The MOTOACTV can estimate how many calories you've burned based upon the intensity of your workout and your personal profile. Other collected data may include the distance and pace you traveled as you cycled, walked or ran. If you were outside, GPS coordinates will indicate your route. You can map out your favorite routes and use them for future workouts.

The MOTOACTV even goes so far as to analyze the music you listen to as you work out. Did a particular power ballad from a 1980s hair metal band really get you to pick up the pace? The MOTOACTV will make a note of it. The next time you're hitting the track and you feel your speed falter, the MOTOACTV may well take things into its own virtual hands and blast out that one-hit-wonder to get you back on track.

As you set up your profile, you can choose to engage advanced features. You can tell the MOTOACTV to automatically start a running routine when it detects that you're running outside. You can engage a coaching mode so that a virtual coach gives you tips and encouragement over your headphones as you work out. You can also set up laps on the MOTOACTV and measure lap times as you train for longer distances.

The MOTOACTV has limitations. It's water resistant, but not waterproof. That means you can't use it while swimming or doing other aquatic exercises. While individually the various functions of the MOTOACTV require a comparatively small amount of power to operate, collectively it can be quite a drain on the battery. That means if you're training for long-distance running or cycling, the battery may not last for an entire workout.

Upon launch, the MOTOACTV could support about half a dozen different types of workouts. But with firmware and software updates, this number could increase over time. It's also possible that Motorola could introduce support for a wider array of sensors if there's a strong enough market response.

Can a device like the MOTOACTV help you lose weight? Studies indicate that people are more likely to follow a proper exercise and diet regimen if they keep a record of their activities. It may help with motivation and focus, preventing people from falling out of the habit of exercise. And MOTOACTV also allows you to set up competitions with real or virtual exercise buddies to keep you on your toes.

Ultimately, weight loss and fitness requires you to do a lot of work. Buying a device won't guarantee that you'll shed pounds or build lean muscle. That's going to depend upon your own efforts. But when you have hard data to help you keep track of your progress you may just find the inspiration to achieve your goals.

I've attended CES every year since 2008. It's usually pretty easy to pick out the big trends each year as you travel the showroom floors. In 2012, one of those trends was fitness technology. It seemed like dozens of companies -- from specialty vendors to mega corporations -- brought some sort of fitness gadget to show off. The Motorola MOTOACTV was one of the devices that impressed me -- I particularly liked the idea of a device that would play just the right song to help me power through the last leg of a run.