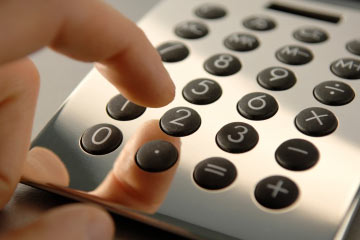 Imagine trying to do your taxes or plan a budget without at least a basic calculator. See more essential gadgets pictures.
© iStockphoto.com/peepo

There may have been a time when the most complicated computations people needed to do could be performed on their fingers and toes. But these days, it's all but impossible for many people to imagine doing anything involving numbers -- from math homework to tax returns to tipping servers in restaurants -- without the help of at least a basic pocket calculator. In fact, electronic calculators are so widespread now that it's hard to believe they didn't become commonplace until the late 20th century.

Before the invention of the modern calculator, people used some other tools for computation. The abacus, for example, is one ancestor of the calculator. Probably of Babylonian origin, early abaci are believed to have been boards on which the position of counters stood for numerical values. However, the modern abacus -- which some people still use today in China, Japan and the Middle East -- works by moving beads along wires that are strung on a frame [source: Britannica: Abacus].

Throughout much of the last century, some people performed calculations using motor-assisted mechanical adding machines and others used mathematical tables and slide rules -- devices with movable, graduated scales that, depending on what type you have, can handle everything from multiplication to trigonometry [source: Britannica: Slide Rule].

Finally, in the 1960s, advancements in integrated circuitry led to the development of electronic calculators, but the early versions of these devices -- created by companies such as Sharp and Texas Instruments -- looked very little like the one you may be carrying around today in your briefcase or backpack.

To learn more about the evolution of the modern electronic calculator -- and see how consumer demand for smaller calculators led to the creation of microchips that power the appliances we use every day -- read on.

Evolution of the Electronic Calculator 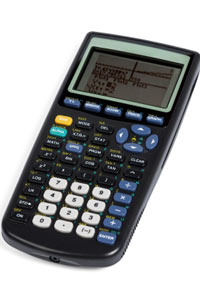 Graphing calculators have many advanced functions, including solving and graphing equations.
© iStockphoto.com/mbbirdy

Several electronics companies and inventors may claim a first when it comes to the development of the electronic calculator. Japanese company Sharp is said to have created the first desktop calculator, the CS-10A, in 1964. This model resembled a cash register and cost about as much as mid-sized car [sources: Lewis, Sharp]. In 1967, Texas Instruments developed what is known as the first portable, handheld calculator -- a device that could perform addition, subtraction, multiplication and division -- in a project that the company nicknamed "Cal Tech" [sources: Courier Mail, Texas Instruments].

Using "Cal Tech" technology, Canon developed the first handheld calculator for commercial use, which debuted in 1970 with a price tag of $400 [source: Texas Instruments]. The next few years became something of a race between manufacturers to make calculators smaller, more accessible and less expensive. In 1972, British inventor Sir Clive Sinclair introduced the Sinclair Executive, which is considered by many to be the world's first affordable pocket calculator [sources: The Press, Western Daily Press]. Its thickness was that of a pack of cigarettes.

These continued advancements in calculator technology were largely made possible by the development of the single-chip microprocessor in the late 1960s. Before this time, engineers built the computing "brains" of calculators (and computers) with multiple chips or other components. Basically, a single-chip microprocessor allows an entire central processing unit (CPU) to exist on one silicon microchip. (To learn more about this technology, check out How Microprocessors Work.)

Intel Corp. created the first commercially available single-chip microprocessor -- the Intel 4004 -- in 1971 [sources: Behar, Intel]. It was capable of performing basic arithmetic, 4 bits of information at time. However, Intel's co-founder, Gordon Moore, predicted that the capacity of a single chip would double about every two years. This theory is known as "Moore's Law," and so far it still holds true. Not only did calculators become smaller over the years, they became capable of increasingly advanced applications [source: Intel].

Today, in addition to modern versions of the basic pocket calculator, complex scientific and graphing calculators are available and used by both students and professionals such as engineers. Many use well-known computer languages and are programmable according to the user's needs. In fact, when Texas Instruments introduced its TI-92 model in 1995, they called it "a calculator with the power of a computer lab" [source: Texas Instruments]. Many scientific and graphing calculators may be capable of some of these functions:

Read on to the next section to find out more about solar cells, circuit boards, and some of the other parts that make up a calculator.

If you've read the previous page, you know by now that handheld calculators need single-chip microprocessors to function. But how do you activate the microprocessor? It all starts with what's on the outside of the device.

Many modern calculators have a durable plastic casing, with simple openings in the front that allow rubber to push through, just like a television remote. By pressing a button, you complete a circuit underneath the rubber, which sends electrical impulses through a circuit board below. Those impulses are routed through the microprocessor, which interprets the information and sends a readout to the calculator's display screen.

The displays of most early electronic calculators were made up of LEDs, or light-emitting diodes. Newer models that use less power incorporate the liquid crystal display, or LCD. Rather than producing light, LCDs rearrange light molecules to create a pattern on the display and ultimately don't require as much electricity.

Early calculators also had to be plugged in or used bulky battery power. But by the late 1970s, solar cell technology had become cheap and efficient enough to use in consumer electronics. A solar cell creates electricity when the photons of sunlight are absorbed by semiconductors, such as silicon, in the cell. This knocks loose electrons, and the electric field of the solar cell keeps them all traveling in the same direction, thus creating an electric current. (Something like an LCD calculator would only need a low-level current, which explains why their solar cells are so small.) By the 1980s, most manufacturers of simple calculators were taking advantage of solar cell technology. More powerful scientific and graphing calculators, however, still use battery power.

In the next section, we'll look more closely into binary code and how the calculator actually does its job.

You may have used a pocket calculator at some point to spell words upside-down, such as 07734 ("hELLO"). But did you know that this language actually has a name? It's called "BEGhILOS," after the most common letters you can create using a simple calculator display.

How a Calculator Calculates

Like any electronic device, the chips inside a calculator work by reducing any information you give it to its binary equivalent. Binary numbers translate our numbers in a base-two system, in which we represent each digit by a 1 or a 0, doubling each time we move up a digit. By "turning on" each of the positions -- in other words, by putting a 1 in it -- we can say that that digit is included in our overall number.

Microchips use binary logic by turning transistors on and off literally, with electricity. So, for example, if you wanted to add 2 + 2, your calculator would convert each "2" to binary (which looks like this: 10) and then add them together. Adding the "ones" column (the two 0s), gives you 0: The chip can see that there is nothing in the first position. When it adds the digits in the "tens" column, the chip gets 1+1. It sees that both are positive, and -- since there are no 2's in binary notation -- moves the positive reply one digit to the left, getting a sum of 100 -- which, in binary terms, equals 4 [source: Wright].

This sum is routed through the input/output chip in our integrated circuit, which applies the same logic to the display itself. Have you ever noticed the way the numbers on a calculator or alarm clock are made up of segmented lines? Each one of those parts of the numerals can be turned on or off using this same binary logic. So, the processor takes that "100" and translates it by lighting up or turning on certain segments of the lines in the display to create the numeral 4.

On the next page, we'll look at the calculator's impact on the world and how we can expect to see them develop in the future.

An engineer in the Hessian army first devised a predecessor to the modern computer in 1786. His idea was for a machine that could print mathematical tables by calculating the differences between various equations. Because it did so sequentially and automatically, these "difference engines" are considered important precursors of the modern computer. A Swedish father and son team, the Scheutzes, built a working difference engine in 1853 which is still on display at the Smithsonian Institute.

The calculator has had a profound impact on the world, making computations quicker and more exact. In the classroom, calculators have given many students the ability to learn about and put complex formulas and concepts into practice more easily. Especially in lower-grade mathematics courses, some instructors still don't allow their use to make sure students truly understand mathematical concepts and learn problem-solving techniques. But for many calculus and trigonometry courses in high school, for example, graphing calculators are a requirement.

However, there has been some controversy regarding the use of powerful calculators in class, because some believe that using the devices to do the work that people's brains once did can result in the loss of true mathematical ability. Recent research suggests that advanced physics students, for example, can often be hampered in their learning by an overreliance on mathematical aids [Source: Bing]. Graphing calculators have even been banned in some classes because of their high memory capability. Students can use their calculators' memory to cheat by storing other information -- like periodic tables or test answers -- in them.

Engineers continue to make advancements in calculator technology, and as they become more and more complex, the lines between personal computers and classic calculators may continue to blur. For their current models, some companies are exploring more ecologically sound components, including the development of more efficient and recyclable power sources, and even using materials like recycled cellular phones in their manufacturing.

Calculators have even moved online and have a number of practical applications. Here are some specific types of calculators you might find online:

These online versions all use the same principles as your hand-held calculator, but present information in easy-to-use ways with access to massive databases of related information. Pretty much anyone can use them, which just goes to show that calculators truly aren't just tools for the likes of engineers, scientists and accountants anymore.

For more information on calculator technology and related topics, check out the links on the next page.

If terms like "integrated circuit" and "microprocessor" sound familiar to you, it's no surprise. Intel's introduction of the single-chip microprocessor paved the way for several of the electronics we use on a daily basis. Many tools and appliances -- from your computer to your television and even your microwave oven -- may incorporate this technology, but it made its first appearance in the calculator.