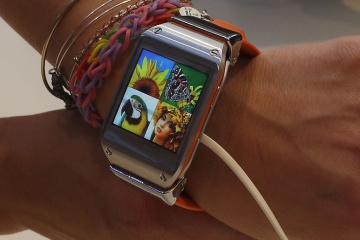 One of the biggest challenges to smart watch development is finding a way to conserve battery life while powering a beautiful screen.
© BRENDAN MCDERMID/Reuters/Corbis

Smart watches haven't exploded in popularity for various reasons. The technological hurdles are high. And the fashion faux pas are, well, unforgivable.

Let's start with the tech side. Because human wrists are only so big, wrist watches must be extremely compact. In turn, this means the display must be small. That means a populace accustomed to ridiculously oversized smartphone screens must learn to use a substantially smaller interface on a smart watch.

It also means that software developers must find intuitive graphical interfaces that fit a watch's limited display area. As programmers who create smartphone apps can attest, this challenge can make or break a product.

Battery life is another notable design challenge. Current battery technology will only power a glowing smart watch with myriad functions for a few hours. After that, it's back to the charger.

And then, of course, there's the fashion aspect of smart watches. Like it or not, a watch is a fashion item, and it reflects directly on your ability to dress yourself properly in the morning. Most manufacturers are still struggling to combine features and fashion in ways that don't shriek "geek." The designs tend to be clunky, obnoxiously large and likely to clash with any wardrobe that rises above casual. A smart watch at a black tie affair? Let the chortling begin.

Given manufacturers' struggles in perfecting smart watches, it's worth wondering why people would want them so badly, anyway. One reason is that smartphones are so demanding of our attention. Everywhere you go, you see people grasping and staring into their phones, as if they were the window to their soul (and perhaps they are).

A gadget that's more passive and less obtrusive -- such as a watch -- could potentially change the way we interact with personal gadgets. Rather than constantly occupying one or both sets of fingers, a watch can simply rest on your person. The right watch, then, might help you reclaim some of the mental territory that's been overrun by the smartphone army.