Watches on the Rise 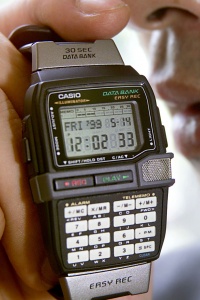 Smart watches aren't going to sneak up on anyone. Digital watches with built-in computer functions have been around since the 1970s. But most of these watches had comparatively primitive capabilities.

Well-known brands such as Seiko, Pulsar and Casio have all produced watches with some digital capabilities. They could store bits of information, crunch numbers and even let you play some basic games. Swatch, Fossil and Microsoft all followed with their own versions, none of which really made an impact on consumers.

In terms of functionality, current smart watches generally don't do anything particularly groundbreaking. They simply shrink many of your smartphone's features into a form factor that you can wear on your wrist. But with miniaturized technology advancing at high speed, some people think watches are ready for the masses.

Analysts at NextMarket Insights see a huge potential for smart watches. They anticipate sales going from a relatively paltry 14 million in 2014 to a whopping 373 million before the end of 2020 [source: NextMarket].

Many companies, including some corporate heavyweights, are hoping that smart watches will mean big profits. Samsung, Sony, Qualcomm, Motorola, Nissan, Adidas and Timex already sell versions of smart watches. Blackberry, Toshiba and LG want to be in the mix, too, and as of 2013, there are loud rumors that both Google and Apple intend to crash the smart watch party as soon as possible.

Other numbers may be telling as to the direction of smart watch sales. NextMarket anticipates that about half of all smart watch sales will run Google's Android operating system [source: NextMarket]. For anyone even vaguely familiar with Android's current domination in the smartphone market, it's easy to see why Google could be an odds-on favorite to rule your wrist.

But let's not get ahead of ourselves. To date, smart watches haven't created much buzz with buyers. There are some powerful products out there, though.