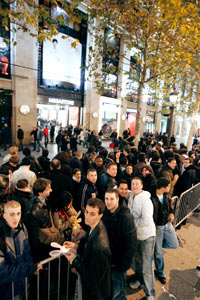 People wait in front of a store in Paris for the Wii to go on sale in December 2006.
Jack Guez/AFP/Getty Images

Online gaming is a market that no video game company wants to miss, and Nintendo is no exception. With that in mind, Nintendo not only designed the Wii to let players compete against each other online, but it also added an entirely different aspect of the Internet to its newest system -- browsing. Once the Wii has been hooked up to the Internet, either wirelessly or with an Ethernet cable, you can download the Wii Internet Channel for free. As of 2010, all Wii consoles come with the channel already installed.

The full version of the Internet Channel, which is a version of the Opera Web browser. Launched in April of 2007, this version of Opera allows Wii owners to surf the Web in a unique fashion. The font is much larger than it is on a computer, so it's a lot easier to see from the comfort of your couch. You can also zoom in and out and scroll up, down and sideways using the Wii remote.

The Wii Internet Channel takes only a few seconds to launch, mostly because the machine stays connected to the Internet even when its main power is switched off. The software is saved on the 512 MB Wii internal flash memory. The software can also be transferred to an SD card after you download it, although temporary Internet files will remain on the internal memory. The Opera-based browser can support a host of Web 2.0 technologies and applications including:

The biggest gripe about the Wii Internet Channel is that the browser doesn't support Adobe Flash 9. According to Opera, the reason that the browser does not support the later versions of Flash is that a software development kit isn't yet available for either version. Because Opera utilizes an older version of Flash, problems may arise while you're trying to view certain Flash videos. Aside from the problems on the user's side, Nintendo is also having a bit of trouble with the Wii Internet Channel. Apparently, hackers have found a loophole in the system that allows them to run their own code on the Wii console. The loophole is in the Flash Player embedded within the browser and could allow hackers to create video game emulators. That sounds like a great loophole, right? Not if you're Nintendo. One of their potential moneymakers is the Virtual Console, which charges gamers between $5 and $10 for unlimited access for each title.

The Wii can use an Internet connection in more ways than just browsing. There are also free applications such as Wii's News and Forecast Channels. The News Channel provides you with a view of the globe, which allows you to view news by region if you wish. The Forecast Channel also gives you a view of the globe, but this view also shows current weather systems around the world. If you zoom out far enough, you can see an accurate star map in the background. Since you register your Wii's location, it also knows what you're looking for in the way of a local forecast.