"Wii Fit" and the Balance Board 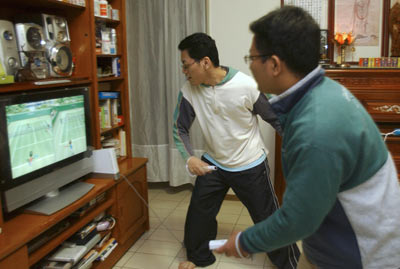 Two men in Taiwan test out the Wii in March 2007.
Patrick Lin/AFP/Getty Images

According to a federal report funded by the Robert Wood Johnson Foundation, one-third of American children are either obese or at risk of becoming obese [source: Robert Wood Johnson Foundation]. Many people blame television and video games for the increase in childhood obesity, claiming that kids today just don't get enough exercise. Nintendo's Shigeru Miyamoto found a way to get kids exercising while enjoying one of their favorite activities -- playing video games. In 2006, Nintendo revealed an exercise game known as "Wii Health Pack," which has since been renamed "Wii Fit." "Wii Fit" includes more than 40 different activities that are designed to keep players active and healthy while entertaining them at the same time. The activities focus on four different aspects of exercising: aerobics, muscle conditioning, yoga and balance.

"Wii Fit" comes with the Wii Balance Board, which is a wireless board that senses small shifts in posture and weight placement so that your Mii, or onscreen character, mimics your movements. The Balance Board, which resembles a bathroom scale, has gyroscopic technology and multiple sensors built into it. The gyroscopic technology measures shifts in weight based on the conservation of angular momentum. Angular momentum measures the extent to which an object rotating around a reference point will continue to do so until acted upon by some outside force. The onboard sensors measure a user's body mass index and center of gravity. The Wii Balance Board goes beyond simply calculating your body mass index; it also tracks your overall progress in terms of your fitness age. A person's Wii fitness age is calculated by factoring his or her body mass index, performance during balance tests and overall center of gravity. Many players find that tracking their progress makes "Wii Fit" more fun to play. Users want to be as fit as possible in the eyes of the game so that, like in any other video game, they can claim to be the best. The game is also designed to inspire players into setting personal goals, which help them stick to their "Wii Fit" exercise routines.

"Wii Fit" combines traditional exercises such as press-ups (push-ups), yoga, stretching and step aerobics with exercises designed to entertain, such as hula hooping, ski jumping and heading soccer balls. On Oct. 4, 2009, Nintendo released the follow-up version to the original, "Wii Fit Plus." The bundle is $10 more than the original ($89) when packaged with the balance board. A $19 stand-alone version of the game is available for those who already own a Balance Board.

"Wii Fit Plus" features the same interface as the original and allows users to download data from the previous game but adds 15 new balance games, three new yoga and strength training exercises and several extra playing modes. "Wii Fit Plus" can even be used as a scale.

The Balance Board has turned out to be a great peripheral for other games, too. Snowboarding games such as "Shaun White's Snowboarding," for instance, takes advantage of the board's unique sensing ability. Players stand on the board and lean to control the rider in the game.

The Balance Board is also used in popular games like the "Jillian Michaels Fitness Ultimatum" series. Similar to the "Wii Fit" games, the Jillian Michaels games are fitness programs. The difference is the intensity. For instance, while doing push-ups in the game, you must touch your chest to the Balance Board. If you fail to do this, the game recognizes this and criticizes you for your lack of effort.