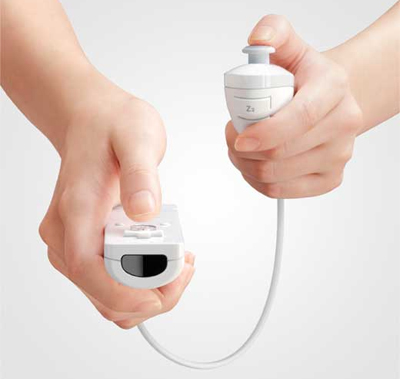 Here, a Nunchuk analog unit is attached to the controller. Thanks to an on-board accelerometer, the Nunchuk is also motion sensitive.
Photo courtesy Nintendo of America, Inc.

The system isn't quite as pure as the previous description would lead you to believe. First of all, the accelerometers alone do not provide the accuracy needed to play certain games. A Sensor Bar, or "control strip" must be placed above or below the user's television to monitor the position of the controller. Secondly, in many games you need the ability to aim and control more than one thing at a time. For example, in any first-person-shooter game, you will want to shoot while running. This means that you must be able to aim the gun and simultaneously move your character. The Nintendo Wii system has two ways to handle this problem.

Thanks to Bluetooth technology, the Wii can handle up to four remotes at once. And don't worry that it will get cramped with four folks hovering near the console. That's not necessary. Thanks to the Sensor Bar, as long as a remote is within a 30-foot (9.1-meter) range of the Wii console, there should be no problem with the wireless signal.

To power the Wii, Nintendo has taken an interesting approach. Nintendo has focused on building a console that is "more power-efficient, quieter and faster to start" [source: IGN].

According to an article on the IGN Web site, Wii runs "on an extension of the Gekko and Flipper architectures that powered GameCube." The "Broadway," Wii's CPU, which is made by IBM, packs 729MHz of power. Wii has 24MB of "main" 1T-SRAM on board and an additional 64MB of "external" 1T-SRAM -- for a grand total of 88MB of RAM [source: IGN].

The Nintendo GameCube was released in September 2001. The Wii came out about five years later. It's interesting to compare the two systems and see just how much can change in five years: