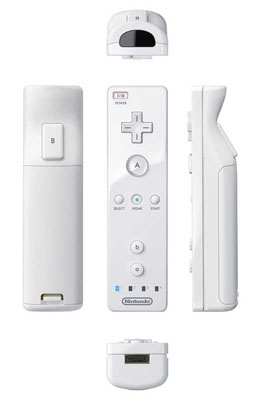 The controller from all angles
Photo courtesy Nintendo of America, Inc.

Prior to its release, Nintendo had several demos that let people experience the new controller. One demo let players shoot at an object on the screen -- they simply pointed the controller at the target and fired. In another demo players flew an airplane. All they had to do was move the controller in the way theywanted the plane to move, and the plane on the screen moved. The motion-sensitive controller made it easy to do sharp turns, barrel rolls and loops.

In other demos the controller acted like a stick. The controller manipulated an on-screen fishing pole, drumstick or flyswatter.

There are several advantages to this approach:

In the next section we'll discuss some variations on this controller and see how the console is powered.