Taking the Gloves Off 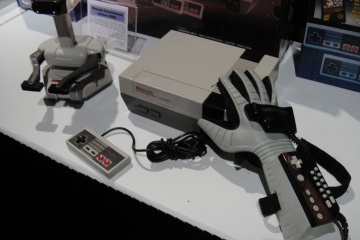 Even the Power Glove's included literature reflected the panic with which the manufacturer threw this product together.

Let's start with some silliness straight out of the product manual. The microphones were mounted to a so-called L-bar that rested on top of the TV. This (obviously L-shaped) bar had to be somewhat level with respect to the TV. To ensure that it was high enough, the Nintendo user manual helpfully suggests that you pile "books, boxes or other stackable things on top of your TV to lift up the L-Bar." Alternately, you could just rest the L-Bar in front of the TV on "a chair, a table or even large box." Say what you will about the Power Glove being a forward-thinking gaming product, but it had a long way to go in terms of feng shui.

Before you could use the glove with certain games, you had to configure it using program codes. The first program code was basic and featured fundamental gaming controls. Move your hand left and right to move the character in the same direction; ditto for up and down. To trigger the A and B buttons, you flexed your thumb and index finger, respectively.

There were other programs preset for specific gaming functions. Want to pilot a plane? Preset No. 5 allowed you to bank right and left and also pull backward and forward to control your onscreen wings.

But you had to remember which movement would translate into the proper onscreen jump, kick or punch with the program code you were using. Many of the glove's programs were actually so counterintuitive in this regard that Mattel provided an illustrated guide for each of the 14 program codes. Even for hardcore, everyday gamers, this unwieldy system was difficult if not impossible to remember in the heat of a fast-paced game.

Because the back side of the glove had regular gamepad controls, such as directional arrows and action buttons, you could also use it just as you would a regular controller. It was likely the only way to use the Power Glove with any consistency.