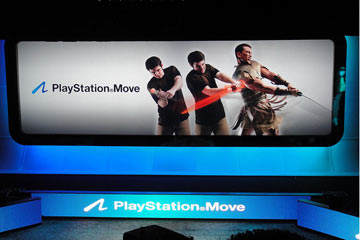 Video games sure have changed a lot in the past 30 years -- but, strangely, the way we interact with them hasn't changed that much at all. In the 1980s, the Nintendo Entertainment System helped cement a control scheme that has endured to this day: a small controller, held in both hands, with one thumb resting on a cross-shaped control pad and the other hovering over a pair of raised buttons with A and B on them.

As games evolved, so did controllers. They added extra buttons for more actions, triggers for our index fingers to rest on and finally joysticks to better control 3-D movement. Ergonomically, controllers have differed quite a bit -- but when it came to functionality, they were about the same. That is, until the Nintendo Wii came along, reinvented the controller and sold boatloads of systems.

The Wii focused on controlling games with motion and pointing at the TV. Its controller looks far more like a television remote than a typical game pad, and this new form of control has helped Nintendo sell nearly 74 million Wiis worldwide between November 2006 and July 2010 [source: Alexander]. Sony and Microsoft have been scrambling to tap into the Wii experience -- but how do they beat Nintendo at its own game?

PlayStation Move on the Outside 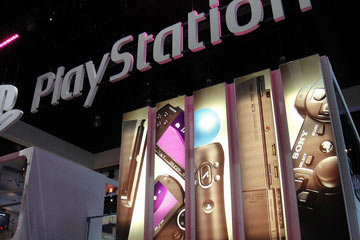 A closeup of some of Move's features.
Doug Kline @ popculturegeek.com/flickr

PlayStation is a well-established brand, and Sony played it safe with the overall design of the Move by closely adhering to an aesthetic gamers would recognize. Like the PlayStation 3 controller, the Move remote is matte black plastic, with four small face buttons near its top bearing the familiar PlayStation symbols: X, O, square and triangle. The four small buttons flank a larger center button marked with the Move logo.

The Move controller's slight hourglass shape and button placement help guide the user's hand into place, since the thumb is meant to rest over the center Move button. Since the PlayStation Move is all about motion, it can get away with fewer in-game actions springing from button presses; hence one dominant, large button.

The final button on the face of the controller bears the PlayStation logo and can sync the controller to the console and access the PlayStation 3's dashboard. The typical start and select buttons for pausing and options rest on the sides of the controller near the top. Finally, on the back of the device is a concave trigger (appropriately marked with a T) for gamers to cradle with an index finger -- perfect for first-person shooters or any motion control trying to simulate a hand grip [source: Mikhailov].

Of course, there's the impossible-to-overlook sphere resting atop the Move wand. It even glows! As we'll explain in the next section, that glowing ball is actually what allows the PlayStation eye camera to track the controller's movement. 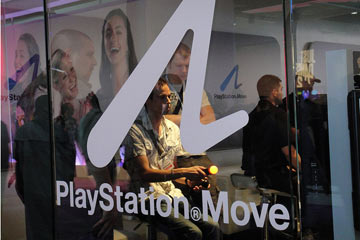 Like most video game controllers released over the past decade, the PlayStation Move includes a built-in rumble feature. The Move controller uses haptic feedback to vibrate. Just like the regular PlayStation 3 controller, the Move connects to the system with wireless Bluetooth technology. The Move also features a rechargeable battery that can be connected to the PS3 and charged via a mini-USB port on the bottom of the controller. Unlike the Wii Remote, the Move controller does not include a speaker to provide auditory feedback during games (other than through the television, of course). Sony considered including a speaker, but ultimately decided that its limited benefits were outweighed by the added cost [source: Mikhailov].

Unfortunately, there's a drawback to the PlayStation 3's Bluetooth support: It can only connect to a total of seven wireless devices. With that restriction in mind, Sony limited Move to a total of four devices -- four Move remotes, or two Move remotes and two Navigation controllers (see sidebar), which offer more traditional analog stick-based inputs alongside the Move. Allowing up to four players to each use two Move controllers or an additional Navigation controller would have required support for eight units connected via Bluetooth [source: Wilson]. This means that some games, which offer enhanced features when played with a Move controller in each hand, will work with no more than two players.

Like the Wii remote's nunchuk, the Navigation controller is an add-on designed to offer a more traditional method of input. It features an analog joystick near the top of the controller; below it are a directional pad and a PlayStation logo button, identical to the one on the Move remote.

The Navigation controller retails for $30 and isn't included in the PlayStation Move bundle. However, the analog stick on the regular controller, the Dualshock 3, can be used for navigation instead -- and that's something every single PlayStation owner already has. 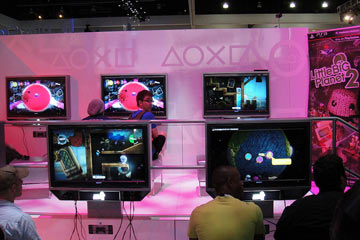 Microsoft's Kinect, an add-on for the Xbox 360 console, is a bit like Move -- but without the controller. Microsoft opted to completely eliminate any kind of direct input device and instead base gameplay completely on body movements. Think of Kinect as a camera like the PlayStation Eye, only with no controller (or glowing ball) to track.

The Kinect's camera uses an entirely different technology from the PlayStation Eye. Kinect actually houses two cameras. One, a typical color camera, is used for face tracking and taking pictures, while the other, a CMOS camera, works with a device that beams invisible infrared light into the room. The camera picks up and analyzes the infrared light to detect objects, and can accurately judge where those objects (like people!) are in 3-D space. The Kinect has also been programmed with a wide variety of human gestures and knows our bone structure. It performs skeletal tracking to follow our every arm wave and awkward hop [source: Miller].

While the Move remote can be used the navigate menus on the PlayStation 3's dashboard, Kinect offers a hands-free gesture system to control the Xbox user interface. It's a neat touch, but some gamers are worried about the gaming experiences Kinect can offer with no joysticks or buttons in sight.

In the end, controlling a console's user interface is merely a side benefit. Making fun, interactive games is the real goal, regardless of the control method. Sony's PlayStation Move tries to offer the best of both worlds: buttons and accurate motion tracking for the hardcore gamers, and appealing software for newcomers. With Move and Kinect as challengers, Nintendo no longer has solitary control of the motion-gaming market -- but it's up to game developers to tap into the potential each platform has to offer.

Which Price is Right?