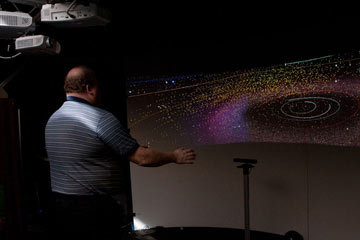 Microsoft's research team came up with a way to use the Kinect to interact with the WorldWide Telescope during the beta period of the Kinect SDK.
Image courtesy of Microsoft

Just jump up and wave your hands! In 2010, the Microsoft Kinect transformed interactive game play into a controller-free experience. To use Kinect, you had to purchase the Kinect device and connect it to a compatible Xbox 360 system. You also had to purchase games designed to work with Kinect.

Hackers were immediately intrigued by the new technology. Almost overnight, they were finding ways to use Kinect controls for more than just a few Xbox games. Third-party device drivers -- software written by non-Micrsoft developers -- for Kinect appeared shortly after its launch. Entire Web sites appeared with hints on finding and using these drivers. One site, Kinect Hacks, showed off hackers' homemade creations, including everything from a 3-D scanner to the JediBot, which uses the Kinect's sensor system to train would-be Jedi in proper lightsaber technique[source: Paoli, Kinect Hacks].

You might think Microsoft would consider this a threat. It probably doesn't surprise you that within hours of the Kinect release, Microsoft stated its commitment to make life hard for the hackers, even threatening legal action [source: Tanz]. But Microsoft's reaction seemed to spur on the hacking community. After three months, Microsoft announced a much different plan: opening the door for hackers and inviting them in.

Microsoft did this by creating the Kinect software development kit (SDK). The company released the SDK beta for non-commercial use in June 2011, followed by a fully supported version 1.0 for commercial and business use in February 2012. The SDK has invited Kinect development from innovative software engineers and entrepreneurs worldwide [source: Schofield].

As we mentioned earlier, the Kinect was originally designed for use with the Xbox 360, and the console software has its own developer kit with rules for interfacing with Kinect [source: Guthrie]. The Microsoft Kinect SDK, though, is designed for Windows applications. By extending a Kinect SDK to Windows, Microsoft has opened Kinect functionality to a much wider variety of uses. This could lead to innovative Kinect-ready software for industries like education, healthcare and transportation.

With the world of Kinect software development open to you, let's take a look at what you need to get started.

Setting Up the Kinect SDK

You'll need a few things before you can use the Kinect SDK. Some of these will require a purchase; others are free or already part of your Windows computer:

The Kinect for Windows sensor listed above is not the same as the Kinect hardware you'd purchase for an Xbox 360. Kinect for Windows costs $249, which is about $100 more than Kinect for Xbox. DirectX SDK and .NET Framework are available as free downloads, and the Express edition of Visual Studio is also free. We've put the download links for this software at the end of this article [source: Microsoft].

As you may have guessed, you'll also need some computer programming experience before you get started. If you haven't used .NET, you'll need to get a good resource to map what you know about other programming languages to the .NET Framework. Along with .NET, you'll want to familiarize yourself with the DirectX SDK designed to create interactive software using the DirectX multimedia interfaces. Visual Studio operates as an integrated development environment (IDE) where you can program in .NET while integrating the DirectX and Kinect SDKs.

Don't know where to go from here? Next, let's check out what some other developers have done with the Kinect SDK and discover how to publish your own Kinect applications. 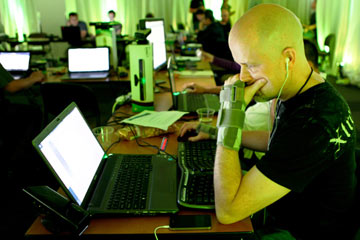 When I got this assignment, I couldn't believe it had been more than a year since I first wrote How Microsoft Kinect Works. As a programmer, it was exciting to look at Kinect from the developer point of view. It was disappointing to me that Microsoft chose to produce two different Kinect devices (one for Xbox, another for PCs) rather than creating an adapter system. I was also disappointed that Microsoft is charging about $100 more for the Kinect for Windows version. I was encouraged, though, that purchasing the sensor would probably be my only major expense if I wanted to start developing my own Kinect applications for Windows. I look forward to seeing more kinetically controlled software thanks to Microsoft's willingness to embrace its eager innovators.