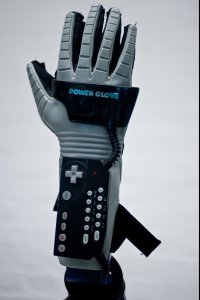 Although it was designed for the NES, it wasn't Nintendo that devised and created the Power Glove. It was actually conceived by Abrams/Gentile Entertainment (AGE), and in the U.S. it was manufactured by toy giant Mattel in 1989. Each glove sold for around $100, and the company managed to sell about 100,000 units before people realized it didn't work.

AGE wanted the product prototyped and manufactured as quickly as possible. They worked with Mattel to complete hardware and software simultaneously so that they could cash in on the NES's phenomenal popularity. They finished Power Glove in less than five months.

The glove plugged directly into the game console and didn't require any other power sources. The forearm of the glove featured a directional pad, action buttons and a bevy of programmable buttons that you could use for things like special finishing moves. Happily, Power Glove came in two sizes. Rather unfairly, it was made only in right-handed versions.

The system worked thanks to two primary components, the glove and three microphones on an L-bracket that you mounted to your television. From two small speakers, the glove emitted ultrasonic beeps inaudible to human ears.

The microphones mounted near the TV picked up the sounds, and the system's CPU calculated the relative distance of the glove depending on how much time it took for the sound to reach the microphones. With that data, the CPU triangulated the glove's location and translated it to onscreen action.

From a distance of 5 feet (1.5 meters), the system had an accuracy to within about a quarter of an inch (a little more than half a centimeter). It worked quickly, updating the glove's position about 30 times per second.

The glove also tracked finger movements. Fiber optic tubes were laced into the first four fingers of the glove (the pinky finger was considered redundant and thus left sensorless and lonely).

As you flexed your fingers, light through the fiber optic tube became more constricted. A light sensor at the base of the glove detected the loss of light and determined where and how far the tube was bent.

Because the sensors were a low-cost and rudimentary variety, the system could basically pick up only four finger positions: fully extended, fully curled, and two in-between positions. Accordingly, the accuracy of the system was low, particularly when compared to similar products like the industrially designed Data Glove, which worked much better but also cost, ahem, around $10,000.