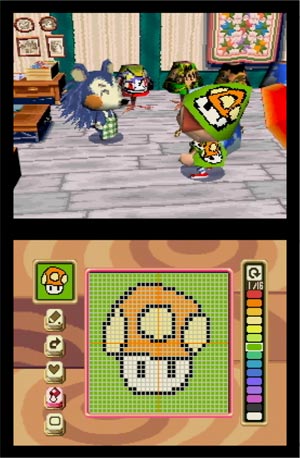 In creating the DS, Nintendo was aiming for a vehicle that allowed developers to do some exciting things never before seen in video gaming, let alone handheld gaming. Enter the two screens. Demos for the DS showed how some of those developers chose to navigate the new territory. Some games gave two completely different perspectives on the on-screen action, while others used the second screen to display gaming peripherals like maps, menus and object inventories.

What Nintendo hopes is the most innovative aspect about the two screens, though, is that they allow for an entirely new input system in video gaming. For all of its dazzling innovations, video games are essentially still controlled by pushing (and pushing and pushing) buttons. With the DS touch screen, there is an entirely new world of controls that are now possible for gamers. At E3, some of the most lauded demos for the DS allowed gamers the ability to draw their way through a game, control characters through touch or use the stylus to "carve" objects onscreen to create digital sculpture.

And it's not strictly for gaming. Also on deck are applications that allow players to write messages, utilize an onscreen keyboard and send and receive text messages during game play.

In addition to the touch screen, the DS also allows for voice or sound input into the game. Yes, that's right: New video games could not only interpret button pushing and screen tracing, but also claps, shouts or screams. Developers can create games where players would control characters through voice recognition, but that's not all. The microphone also allows gamers to chat wirelessly with each other, a feature popularized by programs like Xbox Live.

The DS also features wireless technology for connecting gamers to one another and the Internet. Many thought that Nintendo would install Bluetooth technology in the DS, but it opted for the stronger and wider range of IEEE 802.11.

Nintendo also looked to Xbox Live and its mega hit "Halo" for inspiration in allowing the DS to connect gamers to one another. Up to 16 people can play each other on the DS, and with a wireless LAN connection, that number could increase indefinitely. Add in the possibility of multiple players engaging in game sharing (using only one cartridge to allow many people to play the game), and you can see why some people in the video game industry are very excited about the handheld with two heads.

Prior to release, Nintendo was extremely tight-lipped about the exact specifications of the DS for fear that a competitor might try and beat it to the market. Now that it's out, the company lists these specs:

The games for DS, which are about the size of a postage stamp and resemble some digital media memory cards, will fit in the smaller of the DS's two possible gaming slots. The larger slot, which allows the DS to play Game Boy Advance games, will also be used for a number of accessories that Nintendo has slated for future release.

Nintendo was the first company to introduce 2-D side-scrolling games, which then became the industry standard. The company also introduced games in which characters could move around a 3-D area, which also became the industry standard. Other Nintendo firsts? -- four controller ports, rumble packs and modern controllers with directional pads and buttons (as opposed to joysticks).