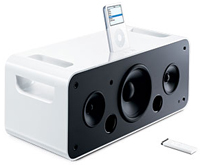 Between the built-in applications and the outside iPod software, this little device offers a lot of functionality. Add in the slew of iPod accessories out there, and you start to see why some people's daily lives revolve around an iPod.

The iPod has become so ubiquitous that you'll regularly hear people refer to MP3 players as "iPods," even if they're not talking about Apple's device. An entire genre of broadcasting has evolved to take advantage of the iPod -- you can download "podcasts" to any type of MP3 player (or computer), but these home-made broadcasts originally popped up as an iPod application.

The extensive list of accessories available for the iPod, both Apple and third-party products, builds on the iPod's hardware and software to place it at the center of a "digital-media experience." From Apple, just some of the accessories you can purchase to outfit your iPod include:

Other companies besides Apple are developing some pretty cool accessories for the iPod. Numerous car-stereo manufacturers have come out with iPod-compatible head units. Tavo has created "Click Wheel-friendly" gloves for people who use their iPods outside in cold weather. The material of the gloves' index and thumb has silver-alloy-coated nylon strands running through it to make your fingertips warm but still conductive. DesignMobel's iPod-compatible bed has an iPod dock built in and comes with an optional Bose sound system, and Atech's iLounge is a combination iPod dock, speaker system and toilet-paper dispenser. The GeekPod 100 from BatteryGeek.net is an external battery that powers an iPod up to 100 hours on a single charge. Yes, 100 hours of listening pleasure. Which brings us to a potential problem that has become an iPod controversy: People who listen to their iPod at full volume for extended periods of time may experience hearing loss.

The possibility of long-term hearing loss for people who have their earbuds in whenever they leave the house has created a nice talking point in the press. The issue is mostly about the iPod's ability to produce sound at volumes greater than 115 decibels. Some experts believe that repeated exposure to this volume, especially via in-ear headphones ("ear buds") can cause "tinnitus and loss of hearing in later life" [ref]. In Europe, Apple has capped the iPod's volume at 100 decibels in response to a French law requiring it, but units sold in the United States don't have the volume cap.

In early 2006, a man in Louisiana filed a lawsuit against Apple related to the potential for hearing loss. He claims the iPod is "inherently defective in design" and does not appropriately warn its users of the potential damage to their hearing. See BBC News: Man sues over iPod 'hearing risk' to learn more.

­ In view of the bad press and the lawsuit, it's possible that Apple will decide to include volume caps on all new iPods with the release of the next generation. For the time being, Apple has released a volume-cap software update for iPod video and iPod nano (see iPod Updater 2006-03-23). Regardless of whether the volume gets turned down, it looks like the spread of the iPod will continue. The release of the first iTunes cell phone in 2005 marked the start of what might turn out to be the increasing integration of iPod functionality into other portable devices. The iPod's Broadcom video processor also supports digital camera functions, so that's a possible utility to look for in future iPods. Recent Apple patents include drawings of a touch screen sporting what looks like a virtual Click Wheel, leading some to infer that the next iPod will have a graphical, entirely touch-sensitive interface.

­ For more information on iPods and related topics, check out the links below.