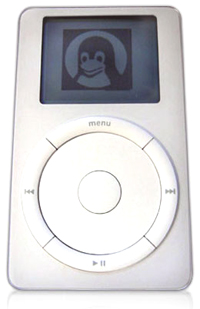 Right out of the box, an iPod can hold, organize and play most people's entire music collection. It can also act like a calendar and a clock, and newer models can play videos and a few simple games. But some people want more from their iPods.

Intrepid technophiles have found ways to hack iPods, giving them the ability to do much more than play music. In this article, we'll explore why iPods can be hacked, which hacks are our favorites and where to go to learn more.

We'll start by looking at what it means to hack an iPod. An iPod is a lot like a tiny computer. A fifth-generation (5g) iPod Video has:

A motherboard connects all of these components together, and external ports provide a place to connect a power cable, headphones and accessories. An iPod also has an operating system and software that allow it to read, store and access files. Firmware - software that tells the iPod how to behave and how to communicate with its software - resides in the device's read-only memory.

These components are like smaller versions of what you can find inside a computer or a laptop. But apart from size, there's one big difference between an iPod and a computer. When you buy a computer, you can also buy software and hardware to upgrade its capabilities. In some ways, computers even encourage you to do this. They have cases that you can open with simple tools and CD-ROM or disk drives that let you install software that you buy at the store. With an Internet connection, you can also legally purchase and download software from the Web.

­ An iPod, on the other hand, is a closed system. You can't get inside it without a special tool to pry the front and rear portions of the case apart. You can't go to a computer store and buy new iPod software. Just about anything you do to modify your iPod voids its warranty. For these reasons, modifications to an iPod's inner workings are known as hacks. When you hack an iPod, you're changing its hardware, software, firmware or operating system, something you're technically not supposed to do.

Numerous iPod hacks rely on one fundamental change - the addition of the open-source operating system Linux. The iPodLinux Project has worked out how to port Linux to an iPod and has developed a Linux user interface called podzilla. Installing Linux allows an iPod to play musical files that it does not normally support, like Ogg files. You can also download:

With the addition of Linux, an iPod becomes less like an MP3 player and more like a PDA or handheld computer.

­ Currently, iPodLinux has been tested on first-, second- and third-generation iPods. Some users who have developed hacks for newer iPods report that it also works on fourth- and fifth-generation models. But regardless of whether it has been tested, installing Linux on an iPod unquestionably voids its warranty.

Getting your iPod to run Linux is really the ultimate hack. It's the foundation for using your iPod in an entirely new way, and it opens the door for limitless applications. For a lot of users, the addition of Linux adds enough options for applications and functions that the benefits outweigh the inherent risks of tampering with the iPod's programming.

We'll look at what Linux modules and other hacks can do in the next section.

Warning: Some Cars Not for Use with Some Sets

There's one important thing to keep in mind if you're thinking about hacking your iPod. Most hacks will void your warranty. In other words, if you decide to change your iPod's hardware or software, the folks at your local Apple Store's Genius Bar won't be able to help you if something goes wrong. In addition, some hacks only work with specific iPod models - a hack meant for a third-generation device might cause problems for a later model. 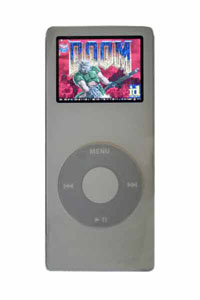 Most iPod hacks either enhance an iPod's capabilities or get rid of functions that users find annoying. Here are some of our favorites.

One of the most notable Linux modules is iDoom, which lets you play Doom on your iPod. The game currently does not have sound, but it does have color when played on color iPods. It has some of the same features that the full-scale game does, like the ability to save games and customize the game controls.

iDoom is only one of many ports of popular Linux-based iPod games. Others are:

Some people find the bit flashing "No" symbol that appears whenever you synch your iPod to be annoying. Engadget explains how to replace it with something else. To do it, you need an iPod, a PC and a Windows application called iPodWizard. You can change the "Do Not Disconnect" graphic to virtually anything you want. iPodWizard also lets you change the iPod's other icons and fonts.

O'Reilly Digital Media explains how to turn an iPod into a universal remote control. The hack combines an infrared (IR) device that plugs into the headphone port with software running on a PC. Essentially, you record the IR pulses from your remote controls and play them back from your iPod.

As soon as the survivors of Oceanic flight 815 learned about "pushing the button" on "Lost," people created screen savers that replicated the process. You can get a similar"Lost" countdown for your iPod. Using it requires iPodLinux.

You probably wouldn't want to write a novel or a dissertation on your iPod. But being able to keep track of a few notes or a grocery list is a handy feature. An iPodLinux word processing module lets you use your iPod to create and save text files.

According to Multiarcade, you can give a 4 GB iPod Nano a storage capacity of 8 GB. The process is fairly simple – you remove the memory chip from a broken Nano and install it in a working Nano. While the resulting player still pales in comparison to a 60 GB iPod Video, it has twice its original storage capacity in the same tiny physical space.

Rockbox completely replaces an iPod's firmware with an open-source alternative. One of Rockbox's most interesting features is that it can read menu options and album, track and artist names aloud. This makes it possible for visually impaired people to use an iPod.

Podsmith turns your iPod into a key to unlock the screen, files or applications on your Macintosh computer. This can protect your data and the privacy of your personal information if your Mac is stolen.

Many new cars come with connections for iPods or other MP3 players built in. But not everyone is ready to trade in their car. O'Reilly Digital Media explains how to modify a car's console to provide a permanent iPod connection. This is more of a car hack than an iPod hack, and the process requires some dangerous chemicals, so exercise caution.

Making changes to operating systems and firmware isn't for everyone. A low-risk way to add more functionality to your iPod is to install software on your computer that takes advantage of the device's existing features. This isn't technically a hack, since you're not changing your iPod's hardware or software - you're simply using software on your computer that produces files the iPod can use. For example:

If you want to personalize your iPod and buying a new case isn't dramatic enough for your taste, you have some other options. These don't involve changing software or firmware, so they're really mods rather than hacks, and they're unlikely to damage your iPod's ability to play music.

The cheapest way to change your iPod's appearance is to download and print a skin. Sites like SkinPod let you browse, print and use skins for free. The best thing about these skins is that they completely cover the scratches that most iPod models are susceptible to. You just print your selected design onto adhesive paper, cut it out and stick it to your iPod. It's a good idea to use a spray fixative to keep the colors from smearing. Keep in mind, though, that if you ever want to remove your iPod skin, you'll probably have leftover adhesive to deal with in addition to the scratches.

If you want something that's a little more permanent and a little less prone to sticky residue, some companies offer custom iPod painting. ColorEnvy can paint iPods and other electronic devices in a range of colors. The company also offers professional scratch removal as well as a product called E-juice that you can use to remove iPod scratches at home.

If you're interested in finding out about using Linux on your iPod or finding other hacks, check out the following links:

See the links on the next page for lots more information on iPods, Linux and related topics.