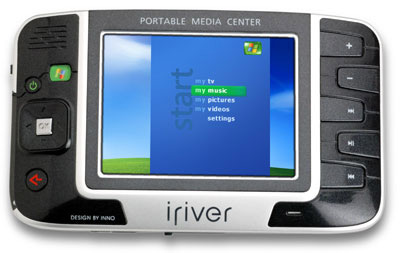 In our increasingly mobile society, portability is king. Thanks to easy-to-transport, high-tech products such as cell phones, laptops, personal data assistants and portable MP3 players, many of the tasks that can be accomplished at home on a personal computer can now be done on the road.

With portable media centers, you can store and access nearly all of your digital entertainment files on a single, lightweight unit about the size of a paperback novel. They can handle recorded television programs, movies, home videos, music and digital photos. You can even connect a portable media center to a television or stereo using the A/V-out jack when portability isn't necessary.

In this article, you'll learn about the storage capacity and wide array of advanced features available in portable media centers.

Windows Mobile-based portable media centers currently feature 20-GB or 40-GB storage capacities and can store and play not only music and photos, but also video content. A portable media center with a 40-GB hard disk can hold up to 160 hours of video, up to 10,000 songs or tens of thousands of digital photographs. Archos currently offers non-Windows portable video player/recorders with similar capabilities to the Windows PMCs, but Archos' players feature up to 100 GB (400 hours of video) of storage.

Windows Media Player 10 has the built-in capacity to convert oversized Windows Media Video files and JPEG pictures into a format and size that the PMC can handle. Windows Mobile-based portable media centers are not compatible with iTunes music files.

Adding Music and Video to a PMC 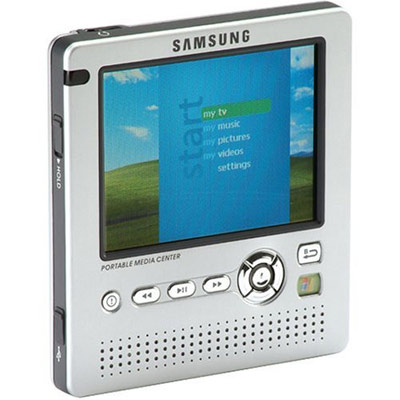 Using Windows Media 10, you can transfer files from a personal computer to a portable media center through a USB 2.0 cable. Windows PMCs will accept the following types of files from a home computer or laptop:

Portable media centers can also play premium downloaded digital music and video from various online services. It should be noted, however, that DVDs you own cannot be transferred to the device because of copyright restrictions.

**File conversion may be necessary for some audio and video files to make them compatible with your portable media center. To adjust media file-conversion settings, go to Tools>Options in Windows Media Player 10. The dialog that displays conversion settings is on the Devices tab. To speed up the sync process for large files, you can choose to allow Windows Media Player to convert audio and video files during computer downtime. 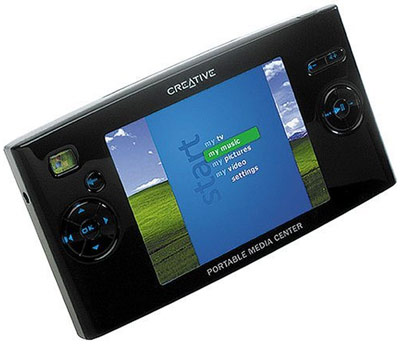 There are three major brands of Windows Media-based portable media centers currently on the market: 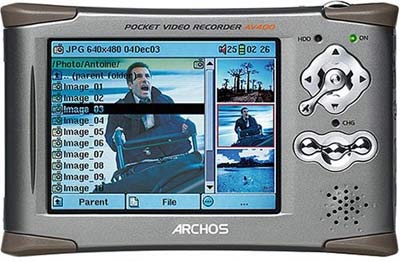 One advantage of the Archos players is the dramatic increase in capacity. Another major advantage is that television programs and movies can be recorded directly from TV, VCR or cable/satellite; with Windows Mobile-based portable media centers, a PC running Windows XP Media Center must serve as an intermediary in the video transfer process. A downside to the Archos players is that you don't have the benefit of Window's Mobile's incredibly simple, automatic file-sync process.

A robust challenger in the portable media player arena is the Sony PlayStation Portable (PSP). The PSP is a lightweight, pocket-size gaming device that utilizes a broad range of digital content. The PSP features a 16:9 widescreen display, USB 2.0 and 802.11b WiFi LAN connectivity and the ability to play games, video and MP3 audio.

In addition, there is increased competition between Windows Media-based portable media centers and Apple iPod media players. Apple's latest iPod supports up to 150 hours of video and is available in 30 and 60 GB models. Apple already has network deals to provide downloadable TV shows, and it is in talks with TiVo to allow for coordination between home DVRs and iPods.

The Future of Portable Media

If portable media centers prove popular with consumers, we can expect to see even greater storage capacity and sleeker and lighter designs.

For more information on portable media centers and related topics, check out the links on the next page.

How the Pebble Watch Works
How to Build Your Own Custom Car Entertainment System
Can I turn my iPhone into a guitar amp?