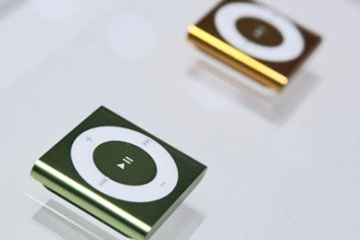 The iPod Shuffle is displayed at an Apple Special Event in 2010. See more ipod pictures.
Photo by Justin Sullivan/Getty Images

Some iPod owners can be very picky. They like listening to their albums from beginning to end. Any skipping around from one track to another will ruin the experience and force the listener to start over or give up altogether. They may spend hours organizing their iTunes library, making sure everything is in perfect order.

Many others aren't so fussy. A simple playlist, filled with randomly chosen songs and uploaded in seconds, will suffice for a morning run. Even better is the shuffle feature, which is designed to randomly select the songs from your iPod or iTunes library and play them back in whatever order they come. It's like a nice surprise at the end of each song -- your very own personal radio station that plays everything you like because, well, it's your music.

Apple must have realized that many people enjoyed the shuffle function on their iPods, and the company tapped into the pleasure of the unexpected in 2005 by introducing the appropriately named iPod Shuffle. It's the budget model in Apple's iPod lineup, designed to take songs from a listener's library and play them back randomly.

The Shuffle isn't just the cheapest iPod; it's also the smallest. The first generation of the iPod Shuffle was about the size of a pack of gum and very similar in appearance to a memory stick -- indeed, after removing one end of the stick, the Shuffle could be inserted into a computer's USB drive and updated quickly. With no display and only five buttons, it held either 512 MB or 1 GB of music, and the smaller model was the first iPod less than $100.

So how does an iPod Shuffle work? What does it look like on the inside? And just how random is iTunes? Shuffle over to the next page to find out.­

Inside the iPod Shuffle 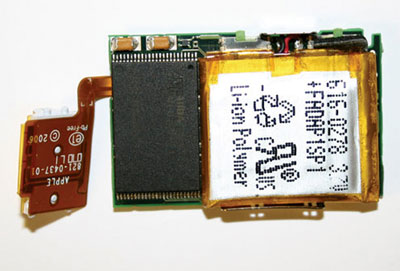 The iPod Shuffle's PCB back and lithium-ion polymer battery.
2008 HowStuffWorks

Although an iPod with 240 or 500 songs might not sound so impressive from the start, you have to consider the size of the iPod Shuffle -- it's about as big as a quarter. The iPod Shuffle stores music using a USB flash drive, the same kind of technology you find on portable memory sticks. They're especially handy for people on the run or listeners who like to switch up their playlists often, because flash drives are easily removable and rewritable.

When you open up an iPod shuffle, the first thing that might stand out to you is the battery located on the back. It's a special type of rechargeable battery that's similar to the kind found in a laptop computer, because it uses lithium to carry electricity back and forth -- a lithium-ion polymer battery. A lithium-ion polymer battery is still different from a regular computer battery in that it's much smaller and lighter and has less of a chance of overheating (even though some iPods have reportedly caught on fire). The battery of an iPod Shuffle is connected to a printed circuit board (PCB), which holds together all the different parts of the inside of the device. Below the battery is the flash memory chip, which stores all of the iPod's music.

The front of the iPod looks a lot different. That's where you'll find the microprocessor, which controls the iPod's functions and randomly selects the songs you listen to. There's also the circular area that take up most of the front, which has five tiny buttons (four on the outside, one in the middle). These are the buttons you press to choose songs when the iPod isn't taken apart -- the left and right buttons skip or replay songs, the top and bottom buttons (the plus and minus signs on the outer case) adjust the volume and the center button plays or pauses the music. There's a hole on one side for a headphone jack, and the other side has two switches: one that turns the iPod on and off and another that turns the Shuffle mode on and off.

The Shuffle supports seven different audio formats: AAC, protected AAC, MP3, MP3 VBR, Audible, WAV and AIFF. The Shuffle also uses a feature in iTunes called "AutoFill," which automatically chooses songs at random and puts as many as will fit onto the Shuffle's flash drive. (For those of us who like to make our own playlists, that option is also available, and you can pick and choose songs you want to upload, too.)

To read about randomness and patterns on an iPod Shuffle, see the next page. 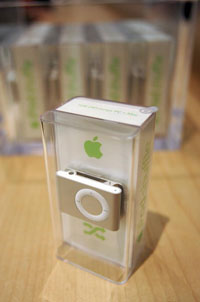 How random is the iPod Shuffle?
Mario Tama/Getty Images

So just how random is the shuffle capability on an iPod Shuffle? Even before the device debuted in 2005, people have wondered about the shuffle function on iPods. Many complain that what they hear from their MP3 players isn't random at all -- every time a new playlist is generated, the iPod seems to pick the same songs by the same artists from the same album. It's almost as though the iPod has its own favorite songs. It's started a flurry of debates in online forums, and some have even suggested that Apple has programmed iPods to play songs downloaded from the iTunes store more frequently than other songs. Apple has denied these claims [source: CNET].

One thing to keep in mind is that it's actually possible to set the degree of randomness. In the iTunes settings, you can choose to set the iPod to play "without repetitions," or you can make it play your favorite songs more frequently if you've rated them. Some people who may have starred their favorite artists and have the wr­ong settings selected are probably hearing Steely Dan over and over again for a reason.

Some argue that our brains are built to recognize order and patterns instead of chaos and randomness. It happens all the time. People like to find faces or animal shapes in the clouds or religious figures burnt on toast or marvel at the significance of a number -- anyone who watches the television show "Lost" might appreciate that last one.

We also have a hard time acknowledging certain coincidences. Take, for instance, the problem known as the birthday paradox. You'd think that after putting two people in a room, the chances of them having the same birthday would be extremely slim, right? You'd be right -- the chances are only 1/365, or 0.3 percent. But how many more people would you need to add to get that percentage up to 50 percent? Most people would say a lot -- when asked how many would need to squeeze into a room before one pair of similar birthdays popped up, university students gave a median of as many as 385 people [source: CompuServe].

The right answer? You only need 23 people to settle a birthday paradox bet with a coin toss. That number seems astonishingly low if we're talking about 365 days out of the year. Even though there may be as many as 500 different songs on an iPod Shuffle, you could think of an artist or an artist's album as a "shared birthday" for that group of songs. The chances of iTunes selecting several tracks from the same artist could be higher than we think, even if Apple's shuffle function does exactly what it's supposed to do.

Still, others argue that Steely Dan's "Reelin' in the Years" playing every other time is, in fact, not so random. To read more about iPods and MP3 technology, see the next page.

How FCC Auctions Work
How Internet Radio Works
Why weren't The Beatles on iTunes?