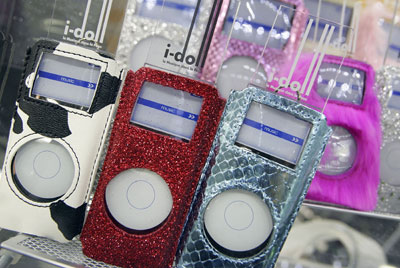 Fashionable iPod covers, from the glittery to the fuzzy to the bovine, on display. Accessories for the MP3 players have created a huge, diverse market -- how weird can they get? See more iPod pictures.
Justin Sullivan/Getty Images

If you ever ride the bus or take the subway in a busy city, chances are you'll see a lot of people wearing headphones to enjoy their music. Walk around a college campus and you'll probably see a similar scene as students study, zone out on the lawn or walk from one class to the next with various MP3 players.

There's also a strong possibility that the majority of those headphones are easily recognizable white earbuds, and the MP3 player in question in an Apple iPod. Although there are several different portable music players on the market, the iPod has dominated MP3 players in sales since its debut in 2001, owning more than 70 percent of the dollar share [source: SF Gate]. ­

­One thing that's grown up alongside the iPod is the iPod accessory business, which includes secondary equipment for the MP3 players like iPod covers and docks. Although Apple designs and sells its own accessories at Apple stores around the world, a large number of third-party developers have thrown their ideas into the pot. It's even possible that accessories have nearly been as successful as the iPod itself. Some value the accessory market at an estimated $1 billion [Source: Business Week].

With such a wide variety of iPod accessories available, there's bound to be something for everyone. And when we say everyone, we mean everyone -- the weird, the quirky and the bizarre. To learn about 10 of the strangest iPod accessories out there, read on.