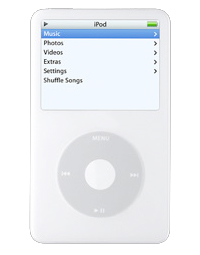 While Apple is very tight-lipped about its iPod software, most reports have the iPod 5G runs on the Pixo OS 2.1 operating system along with PortalPlayer's Digital Media Platform. The PortalPlayer platform is an all-in-one "system on a chip" that provides some of the hardware we already looked at, including the two ARM7TDMI microprocessor cores. The developer package includes audio-decoder support, customizable firmware (with support for DRM-system development) and software-development tools. The iPod user-interface is reportedly based on the Pixo Toolbox software that was available when Apple was creating the device (Pixo is now part of Sun Microsystems).

In addition to the user-interface and operating-system software, the iPod's video coding and decoding happens at the software level. The Broadcom video chip we looked at in the last section handles processing at the hardware level but has a corresponding piece of software to run the video codec.

Where iPod software starts getting really interesting is in the third-party software and "hacks" that have sprung up in response to iPod's popularity. iPod third-party software consists of programs that use or build on current iPod functions without changing the way the device is supposed to work. This includes downloadable iPod games, programs that convert a bunch of DVDs to iPod-friendly video files in one shot, programs that convert PDA data and PowerPoint presentations to iPod-compatible files and software that lets you create your own text-based iPod games.

iPod hacks are programs written to give iPods new (non-Apple-intended) functionality. You know how we talked about things you can't do with an iPod, like sync via FireWire? Well, you can hack an iPod to sync via FireWire. Unless you're a programmer, "hacking an iPod" just means you download a chunk of code that alters your iPod's functionality at the software level. If you're a programmer, it means developing that code. iPod hackers are publishing all sorts of programs that alter the way an iPod works -- some of the software is free, and some of it is for purchase. Some currently available hacks let you:

To learn more about iPod hacks, check out How iPod Hacks Work.