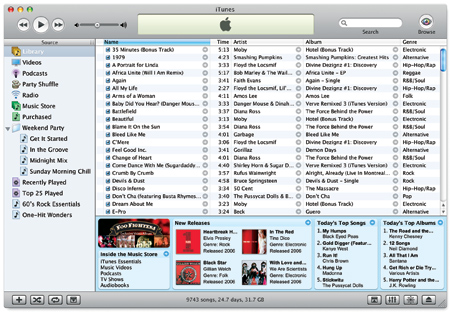 ­ Although the iPod is an Apple product, it works with both Mac and Windows machines. Since it's the top-selling media player in the United States, probably the big question is: What makes it different from any other digital media player? The answer will differ depending on who you ask. Some might say it's the form factor -- the 80-GB iPod classic is less than half an inch (1.4 centimeters) deep and weighs about 4.9 ounces (140 grams) [source: Apple]. For comparison, the Zen Portable Media Center from Creative is 1.06 inches (2.7 centimeters) deep, weighs 12 ounces (340 grams) and has only 20 GB of hard drive space [source: Creative].

Other people might tell you it's the Apple Click Wheel, a touch-sensitive wheel that makes it incredibly easy to navigate through the various menus and options with just a thumb. According to Apple CEO Steve Jobs in a Newsweek interview, "It was developed out of necessity for the Mini, because there wasn't enough room [for the buttons]. But the minute we experienced it we just thought, 'My God, why didn't we think of this sooner?'" And then, some might tell you the greatest thing in the world is the super-tight iPod/iTunes integration (which, ironically, others will curse until the day they die).

iTunes is the integrated jukebox/media-player software that comes with an iPod. It lives on your computer, and you use it for organizing, playing, converting and downloading files from an external source to your computer and from your computer to an iPod. This is really no different from the software than comes with any other portable media player. The thing that makes iTunes a brilliant invention from a consumer-electronics standpoint is the built-in iTunes Store that keeps iPod users coming back to Apple on a regular basis. Anyone who owns an iPhone or an iPod touch can also shop at the iTunes store using a WiFi connection.

­ The iTunes Store lets iPod users purchase music, movies, podcasts, audiobooks and music videos with a click -- it's an integral part of the iTunes software. You can watch or listen to the files through iTunes on your computer and download them to your iPod. And you don't even have to drag and drop: The iTunes software autosyncs with iPod whenever it's connected to your computer through a USB 2.0 port (you can use FireWire for charging, but not for syncing). Just plug it in, and the iPod automatically downloads every new file that you added to your iTunes jukebox since the last time it was connected. It also uploads to iTunes all new data that you added to your iPod since last the two conversed, like playlists and song ratings.