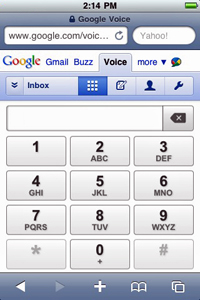 To use Google Voice without the dedicated application, you'll have to visit the mobile Web site.
HowStuffWorks.com screenshot

Not every smartphone has a native application to use with Google's VOIP service. Google Voice and the iPhone don't get along seamlessly. Neither do Palm or Windows Mobile devices. In fact, the only two smartphone systems that have native applications are Google Android and Blackberry. Users running iOS, Palm webOS , Windows and others, need to use Google's Web version of the service.

Google created an application for the iPhone, but Apple pulled it out of its App Store, prompting the FCC to send a letter of inquiry to the Cupertino, Calif.-based tech giant. Instead, iPhone and other smartphone users are forced to go through the Web-based version. Using the Web app means you can't sync your contacts list. This may be nitpicking though, because importing a contact list from other non-Google platforms such as Microsoft Outlook or Yahoo Mail isn't easy either. Also, text messaging is limited. You won't be able to send text messages to more than one recipient at a time. Forget about international texting, too. It isn't supported yet. But that's the case for Android users, too.

Perhaps one of Google Voice's coolest features is also currently among its weakest. The transcription service can give you some less-than-literal translations. Voicemails may or may not come through perfectly when transcribed to text. For this reason, you may want to wait until Google perfects it before relying on it for business purposes -- or asking someone on a date, for that matter. "I hope to see you soon" may come through as "I love your friend June." Ouch.

When we said Google Voice is free, we weren't lying. There's no charge for the basic service. There are some features that'll cost you a small fee, however. For one, you can call long distance through the United States and Canada for free, but you'll be charged for international calling. Some of the enhanced features that work with Google Chrome, for instance, also come with a fee.

When it comes to recording calls, you can only do so for incoming calls. So if you're a journalist and hope to utilize this feature, you'll need to have that person call you. One more thing you should know: If you don't live in the United States, as of the time of this writing, you can't use Google Voice. You must have a U.S. phone number, which, until recently, didn't include Alaska and Hawaii. But now all 50 states can use the service.

For more details on Google Voice and other technology that may make your life easier, take a look at the links below.

Google Voice isn't the only virtual phone and communications management system out there. Similar systems like Rabbit and 3jam give you options to consider.