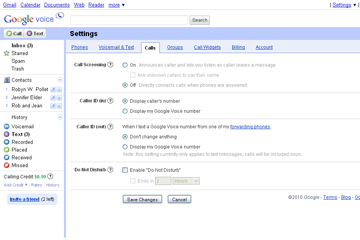 Google Voice lets you control which features you use and how.
HowStuffWorks.com screenshot

Google Voice's defining feature is the ability to use one phone number in place of all your existing ones. However, your Google Voice number doesn't replace your other phone numbers. Think of it as an operator who routes your calls to all your phones for you. It works like this: You have a Google Voice phone number (of your choosing), which in theory, you hand out instead of your cell phone or work number. When someone calls that number, it'll ring all of the phones you select. You can customize it, too. Let's say you know you're in your office during the same three-hour period each day. When you set the parameters for your work phone, you would set it up to ring only at your office during that time. Along those lines of thinking, you may choose to disable your home phone for that same period. It's as simple as that. But that's only part of what Google Voice can do.

All of this is done through the Google Voice management site on the Internet. So, before you can dive into Google Voice's cool features, you need to have a Google account. This is as simple as going to the Google Voice Web site and signing up for a free account.

When we said Google Voice acts like a switchboard operator, we weren't kidding. You can set it to screen calls so when your phones ring, you hear a programmed voice informing you who's calling. You can then listen in to the voicemail live and pick up if it's someone you want to talk to. Along those lines, you can block numbers, too, including annoying telemarketers or stalker-type exes. On the flip side of that, you can change the automated greeting and even setup personal greetings for individual contact numbers.

Google Voice has some other cool free features you would normally have to pay for. For one, you get a free directory service so no more paying to dial 411. Also, you can share voicemails via e-mail, record incoming calls and conduct conference calls. You can even set up call widgets on your home page for customers to call you through that channel, a feature that's great for businesses.

So these are the major features and the gist of what Google Voice can do for you. Now, how about we go through how to place calls in the next section?