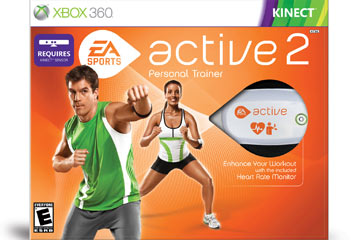 "EA Sports Active 2" for the PlayStation 3, Xbox 360 and Nintendo Wii can help you gamify your fitness plan.
Electronic Arts, Inc.

Sports, by definition, are games. However, you don't have to be an athlete to turn your fitness into a game. You can gamify your efforts to eat better, exercise more and achieve a certain fitness level. Just as sports have challenging but attainable goals, you'll need to set such goals for yourself and keep a scoreboard to track your progress. It also doesn't hurt to set a few small milestones and rewards you'll give yourself for accomplishing them.

Weight Watchers has been gamifying weight loss since the 1960s. Currently, the program consists of keeping a journal of your food and exercise throughout the week, tracking their point values in the Weight Watchers system, and weighing in once a week to check on your progress. During a weekly meeting, a member might receive small rewards such as stickers for each five pounds lost. For some members, though, the incentive to keep playing is just watching their weight and clothing sizes go down each week. That scorecard helps them stay on track as they work toward their ultimate reward, their goal weight.

Game consoles are also gamifiying fitness. The Nintendo Wii was the first big success of the group with its "Wii Fit" game and the motion-detecting game controller and Balance Board. Nintendo sold over $1 billion worth of "Wii Fit" games, and stores consistently sold out of the title for several months after its release [source: Schell]. "Wii Fit" puts your Wii avatar (Mii) in the game, and displays scorecards and encouraging messages for each separate activity and your overall progress. In response to the growing popularity of immersion gameplay, Microsoft's Xbox and the Sony PlayStation have also developed and marketed motion-sensing devices and introduced their own fitness games to take advantage of those devices.

If you find it easy to set goals and motivate yourself to achieve them, you'll have no trouble gamifying your fitness experience. Some of us, though, need the extra nudge of a competitor or accountability to a teammate. When you share and compare your fitness experience with others, you add that next level of play.

You could get this social experience from joining a local fitness group or an online forum where members share their goals and progress. Some companies have gone a step further, tying a video game to team support and competition. One example is "EA Sports Active," a video game for Wii, Xbox or PS3 that uses motion-detecting devices to wear during your workout. Besides introducing a wider variety of fitness activities than the "Wii Fit," " EA Sports Active" also includes an online community to track your progress and interact with others who are using the game to meet their fitness goals [source: EA Sports].

Now that you're up and running, let's look at one of the oldest and most widely used games in business: customer rewards programs.