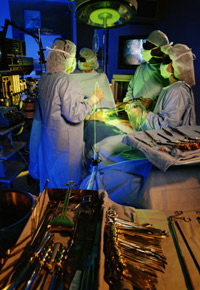 Dr. James Rosser Jr. takes an innovative approach to daily surgical training. At Beth Israel hospital in New York, he keeps an Xbox and a PlayStation 2 for his personal use. But the video game systems aren't for getting in a little fun during downtime -- or at least not primarily. He uses them to prep for laparoscopic surgery.

Rosser has always been an avid gamer, and he's the driving force behind a 2002 study that goes a long way toward proving what he's always believed: There's a significant correlation between video-game skill and surgical skill. He first noticed the two were connected in medical school, when he realized that his fellow students who didn't play video games at all had more trouble with fine surgical skills than he did. And Rosser has been thinking about it since then. The study, published in the February 2007 issue of the journal Archives of Surgery, reports some pretty interesting results.

The surgeons who participated in the study first played the video game Super Monkey Ball. They then took a series of tests to assess their laparoscopic surgery skills. Laparoscopic surgery requires intensely fine finger movements to remotely guide surgical instruments inside a patient. In Super Monkey Ball, players move a monkey who's inside a ball through what amounts to an amusing obstacle course. But with plenty of surgical simulators out there, why practice rolling a ball containing a monkey? It's simple, really.

­In this article, we'll look at the possible connection between surgery and gaming skills. The study conducted at Beth Israel is one of the first to prove the connection. On the next page, we'll find out what the researchers discovered. 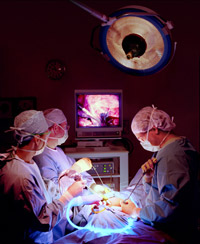 Laparoscopic surgeons must be able to connect hand movement to remote movement viewed on a screen.
Lester Lefkowitz/Taxi/Getty Images

Laparoscopic surgeons operate on colons, gall bladders and almost anything that can be accessed by a small incision. But they never put their hands inside the patient. Instead, they use robotic controls -- essentially a joystick -- to move instruments inserted into the patient through a tiny incision (it's sometimes referred to as a "keyhole surgery"). They watch what they're doing on a video screen. The ability to make an instantaneous connection between hand motion and remote movement viewed on a screen is crucial, because laparoscopic surgeons don't look at their hands. Their hands are moving joystick controls, not scalpels. As luck would have it, that ability is also the mark of a great gamer. The recent study bears out this correlation.

Thirty-three surgeons participated in a two-part process. First, they played three non-medical video games, including Super Monkey Ball, for 25 minutes. Next, they completed a wide variety of virtual laparoscopic surgery techniques. The researchers measured their accuracy and their completion time in both parts.

The results took into account not only the surgeons' performances during the three-month study, but also factored in their level of training, number of years in practice and how many surgeries they'd performed, as well as their video-gaming habits in real life. When all of the factors were considered, the analysis was dramatic [source: ScienceDaily]:

So what exactly does this mean? Should 24/7 gamers be applying to medical school ASAP? Next, we'll find out how the results relate to the real world. 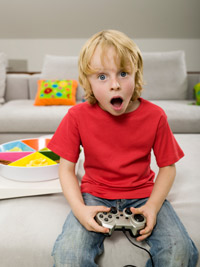 When I first received this article topic, I felt hopeful: Could it be? Are surgeons training via an activity so many people see as pointless (or even destructive)? I've always been bothered by what seems like a blanket disdain for all things video-related in certain segments of our society -- the insistence that TV is evil, movies are trash, and video games are a complete waste of time. My husband and I find ourselves discussing this pretty regularly, possibly because I love TV and he enjoys video games, and we take the position that the automatic rejection of almost any piece of piece of media or technology as truly pointless is unwise.

In writing about the potential for using Monkey Ball, of all things, in surgical training, I felt deliciously validated. Ha! Benefits! Because while I personally see "mere" entertainment as a significant benefit, it's nice to be able to point to something as dramatic and humanity-saving as a 47-percent reduction in surgical errors as a possible result of regular indulgence in gaming. A recent search also uncovered a Nintendo DS game called "Trauma Center" that takes the connection to a more literal level. Brilliant! I'm picturing mandatory gaming labs on surgical rotations.

• Performing laparoscopic surgery is a lot like playing a video game, with the finger-triggered action happening remotely via a joystick.

• The impetus for the study that proved a beneficial connection between video-game play and surgical skills was a surgeon who really loved gaming.

• In this 2007 study, surgeons who played video games made up to 47 percent fewer surgical errors compared to surgeons with no gaming history, and they completed surgical tasks up to 39 percent faster.

• The military has been using interactive simulation technology for surgical training for many years, because they can afford it.

• If the results of this single study are borne out in others, it could allow organizations with less funding than the military to incorporate this type of training into their programs via off-the-shelf gaming consoles.