Education: It's All Fun and Games 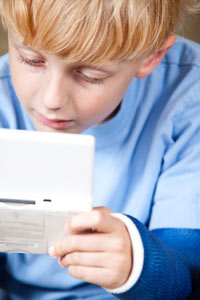 Educators can use games to help engage students in learning.
©iStockphoto.com

In Jane McGonigal's talk mentioned earlier, she cites a Carnegie Mellon University researcher who estimated the average young person today in a country that has a strong gaming culture will spend 10,000 playing online games before the age of 21 [source: McGonigal]. The weekly average playing time for all players ages 12 through 68 is roughly equivalent to working a part-time job [source: Seay, et al.]. McGonigal equates that to a child's hours spent in a classroom from fifth grade to high school graduation assuming no absences. This means people spend as much time mastering games as they do mastering their education.

Educators have long known that using games to engage students in learning can improve their experience and deepen their understanding. Teacher conferences are great places for educators to learn about new games and the curriculum around them. Some games are short-term activities targeting a single topic while others last over several days or weeks covering a variety of educational goals.

For an educational game to be a success, though, students have to feel a sense of reward in playing it. The challenge can be that what's a reward for one student is a non-reward or even a deterrent for another. For example, a gold star and applause from classmates is a reward for those seeking teacher's approval, but not for those concerned that peers will make fun of them for sucking up to the teacher. In addition, an extra 10 points on a test grade might be a big incentive for a student who wants a boost from a C to a B, but it's not much of a motivator for students who consistently make As.

As stated earlier, an enjoyable game experience itself often becomes the reward over prizes received by winning. If we look at this in terms of educational games, we might find ourselves joining educational scholar Scott McLeod of Iowa State University in the question, "Do most educational games suck?" In a post at BigThink.com, McLeod posted side-by-side screenshots of some educational video games he had found and some computer games kids might play at home. In the post, McLeod invited comments from readers as to whether they agreed with his impressions of the games, such as whether simplicity or lower-quality graphics in educational video games affected the quality of the learning experience they provided. Those who commented generally expressed some level of agreement with McLeod's assessment, adding that there's a difference between playing games for the purpose of learning and learning as a result of playing games [source: McLeod].

In her book "Learning with Digital Games: A Practical Guide to Engaging Students in Higher Education," researcher and author Nicola Whitton proposes a possible solution to educational games that don't make the grade. She states that game makers should start by recognizing the key elements that make up any game: competition, challenge, exploration, fantasy, goals, interactions, outcomes, people, rules and safety. Whitton describes the importance of each of these elements and the reason why each one is an essential component even within games specifically designed for education [source: Whitton].