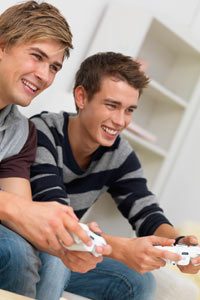 Gamification helps schools and businesses grab the attention of gamers like these.
©iStockphoto.com/Yuri Arcurs

As stated earlier, gamification involves engaging the audience and empowering them to solve problems. Scientific research into human behavior, both from a psychological and a physiological standpoint, confirms that game play is both compelling and rewarding to the player. Before we look at this research, though, let's clarify what people mean by the often-misused phrase "game theory."

There are two theoretical models we could refer to as game theory. The first is the mathematical game theory, which developed out of the work of John von Neumann and Oskar Morgenstern in the 1940s. Their 1944 book "Theory of Games and Economic Behavior" fueled the work of many economists of the time. Included among those economists were the authors' contemporaries Friedrich Hayek and John Maynard Keynes, whose conflicting schools of thought have formed the basis of economic debates ever since [source: Leonard].

The other model of game theory is evolutionary game theory, which looks at competitive versus cooperative behavior in nature from a psychological perspective. The Prisoner's Dilemma is a common game scenario psychologists use when describing the evolutionary game theory premise. In the Prisoner's Dilemma, two men resist arrest for a crime. When police finally capture the men, they place them in separate rooms for interrogation. Police offer each prisoner the same rewards and punishments. If one confesses and the other doesn't, he'll be set free while the other is imprisoned for 10 years. If they both confess, they each get 4 years. If neither confesses, they're each still left with charges for resisting arrest, which carry a one-year sentence [source: Easley & Kleinberg].

Though gamification was born out of observations of modern approaches to marketing, it is also an application of concepts derived from both of these game theories. From the mathematical side, gamification is about developing an economic system around the game where you can calculate your rewards based on interaction with that system. From the psychological side, gamification requires recognizing whether the target audience would feel more rewarded by competition or cooperation.

Beyond the game theories, there are biological motives for gamification. Our brains are programmed to respond to other people. For example, increased amounts of the neurotransmitter serotonin seem to correlate to feelings of cooperation and fairness in game players [sources: Crocket, Singer and Steinbeis]. In contrast, research links low serotonin with depression, aggression and antisocial behavior [source: Crocket].

So, why gamify? Because, according to gamification's proponents, people want it both physically and psychologically. Games that are enjoyable and bring a sense of reward make us feel good. Next, let's look at how enjoying a game has the added advantage of making us smarter.