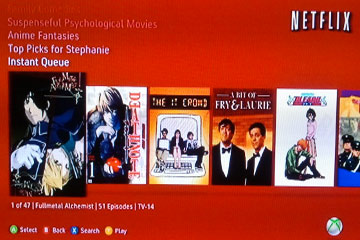 Nintendo is hoping to chip away at Microsoft's share of the console-as-entertainment-hub market by offering apps for Netflix and Hulu Plus.
Screen capture by Stephanie Crawford for HowStuffWorks

Over the lifetime of the Xbox 360, Microsoft has focused less and less on gaming and more and more on making the device a do-it-all media center powerhouse for the living room. Working with cable companies, providing apps for video services like MLB and HBO, redesigning the interface to work better with its Kinect motion controller -- Microsoft wants the Xbox to be used for everything. And Nintendo's aiming for the exact same thing, with what could be a secret weapon: the GamePad.

At launch in the U.S., the Wii U featured individual downloadable apps for Netflix, Hulu Plus, and YouTube. Like on other consoles, those apps can be logged into with an existing account and be used to stream videos from those services. Nintendo TVii missed its scheduled launch alongside the console in November, but was launched in Japan on Dec. 8 2012. Nintendo TVii works very much like Google TV: It's designed to pull in programming guide data from television providers like cable companies and allow you to organize all your TV content (including the video available through Netflix, Hulu, etc.) through one interface.

The real draw, of course, is that that interface is on the GamePad. Content can be browsed with the touchscreen. Multitasking will be easy, since the guide won't have to take up a chunk of the TV screen. Nintendo also promises it will be compatible with all cable and satellite providers in the U.S., and will also support DVR and TiVO devices. Google TV failed to find an audience for a very similar service, partially because ensuring that quality of functionality across multiple carriers is no easy task.

Nintendo is again playing catch-up. Microsoft's been working with TV content providers for years to build out its media center experience, while this is all new ground for Nintendo. TVii could prove to be an extremely powerful service -- the GamePad's built-in screen and IR blaster make it a potentially perfect universal remote -- but the Wii U's launch has shown Nintendo struggling with the demands of designing an HD console. That could affect Nintendo TVii, too.