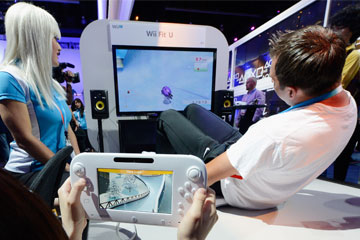 If you loved “Wii Fit,” you might want to check out “Wii Fit U” on the new console.
©Kevork Djansezian/Getty Images

The Wii U launch library consists of games created by Nintendo, including "Nintendoland" and "New Super Mario Bros U," original third-party games like "Scribblenauts Unlimited" and "ZombiU," and ports of older games that first appeared on the Xbox 360 and PS3. That last category includes quite a few popular games, including "Assasin's Creed 3," "Batman: Arkham City," "Call of Duty: Black Ops II," and "Skylanders Giants." There are also a range of downloadable games available from Nintendo's online eShop, and the Wii U can play Wii game discs and games previously downloaded from the Wii Virtual Console.

Wii U games ship on high-density optical discs that hold 25 GB of data on a single layer, just like Sony's Blu-ray. But Nintendo hasn't paid out the licensing fees to play DVD or Blu-ray content with the Wii U -- the console's disc drive is exclusively for games, while some of Nintendo's online features (like Nintendo TVii, which we'll get to in a bit) are geared towards non-game entertainment.

Wii U games can take advantage of multiple different control options: the GamePad's buttons, motion sensors and touch screen, the Wii Remote and nunchuk add-on, and a new Wii U Pro Controller that is geared towards "core" games. Its dual analog stick and face button layout makes the Pro Controller very similar to the Xbox 360 controller.

Journalists have commented that many games ported to the Wii U do little with the GamePad's extra features, but note that most games do support the ability to play exclusively on the GamePad without the TV [source: Ars Technica]. This is unsurprising, since supporting the GamePad requires adding new features to an already completed game. But there are games that make use of it: "Madden 13," for example, allows players to map out football plays on the touchscreen with the swipe of a finger.

Like every Nintendo console, Nintendo will support the Wii U with its most popular series based around consistently selling characters such as Mario and Zelda. The company will make use of its new GamePad in creative ways. The strength of the overall game library will depend on two things: how other developers approach the Wii U, and how its hardware holds up against the successors to the Xbox 360 and PlayStation 3.

This time, at least, Nintendo is supporting online. Nintendo Network will be a key Wii U feature as more and more gamers play with friends and strangers over the Internet.