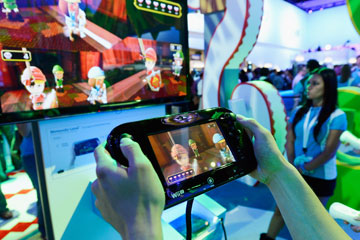 Nintendo is hoping that the GamePad will be a big draw for consumers. The new controller is the primary thing that sets Wii U apart from other consoles.
©Kevork Djansezian/Getty Images

While the faster processor inside the Wii U gives it the power to run more complex games, the real changes in the console are all centered on the new GamePad controller. The GamePad looks a bit like a larger version of Sega's old GameGear handheld system thanks to its wide, rounded body and centered 6.2-inch (15.7-centimeter), 854 by 480 pixel display. But the GamePad has all the trappings of a modern game controller, including two analog sticks, left and right triggers and shoulder buttons, A-B-X-Y shoulder buttons, and a directional pad. It includes a few more buttons as well: the plus (+) and minus (-) buttons that were on the Wii Remote, a Home button for the Wii OS, a power button, and a TV button (more on that later).

The GamePad's traditional buttons and sticks are only part of the story, though. The tablet-like controller houses three three-axis motion sensors -- an accelerometer, gyroscope and magnetometer -- used to detect movement, orientation and positioning. The GamePad can essentially function like a big Wii Remote, since it uses the same technology. But there's even more to the controller: It also has onboard speakers and a microphone, a front-facing camera, rumble, a headphone jack, and an infrared blaster for controlling devices like your TV.

And then there's the resistive touchscreen, which works with an included stylus or the press of a finger. Resistive technology isn't as sensitive as the newer capacitive screens used on most smartphones and tablets, which is why it works better with an accurate stylus than finger controls. It doesn't support multi-touch interaction the way capacitive technology does.

The real magic of the GamePad is in how it interacts with games. Nintendo worked with wireless company Broadcom to develop a WiFi technology that works from up to 26 feet (7.9 meters) away and delivers extremely low-latency video. That means games can be played simultaneously with video streamed to the GamePad and video being displayed on the TV without lag. While some games can be played entirely on the GamePad, with no need for the TV at all, others only offer supplementary information or other game features on the GamePad, like maps or item menus. At launch, the Nintendo Wii U only supports one GamePad controller. Nintendo plans to support two GamePads later in the console's life.

Perhaps the most exciting thing about the GamePad is how games use it -- let's take a look at some examples.