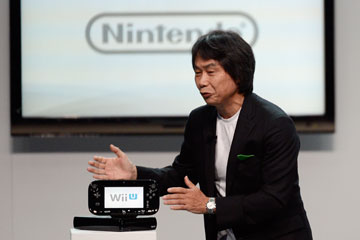 Nintendo visionary Shigeru Miyamoto, creator of many of the brands most popular games, showcased the Wii U at the Electronic Entertainment Expo in Los Angeles, California in June 2012.
©Kevork Djansezian/Getty Images

On November 18, 2012, Nintendo released its first HD console in the United States, almost six years to the day after releasing the Nintendo Wii. The Wii surprised everyone in 2006. Instead of focusing on HD graphics like the Xbox 360 and PlayStation 3, the Wii instead promised new ways to interact with video games, thanks to the Wii Remote, a motion-sensing wand-like controller. Some gamers who preferred traditional controllers criticized the Wii's motion and "waggle" controls and Nintendo's use of old, underpowered hardware. But the Wii sold, and sold, and sold thanks to games like Wii Sports and Wii Fit, ultimately selling nearly 100 million consoles worldwide.

And after six years, Nintendo followed up with a brand new console: the Wii U. Like the Wii before it, the Wii U focuses on a new feature or gimmick to differentiate it from the gaming herd. The console's primary controller is called the GamePad, and it combines traditional controls (analog sticks, face buttons and triggers) with an embedded touchscreen and motion sensors. The GamePad resembles a tablet/controller hybrid, and its onboard touchscreen offers some novel features.

The console streams video to the GamePad, allowing games to display content on both screens. Some games can even be played exclusively on the GamePad, leaving the larger television screen free for a movie or TV show.

While the Wii U introduces a unique feature that other video game consoles don't offer, in many ways it represents Nintendo playing catch-up with the other HD game consoles. Online games, a more robust download store, social networking, and media center functionality are all big features for the Wii U. More than ever before, Nintendo hopes to capture two different audiences: the gamers who love big-budget franchises like Zelda and Call of Duty, and the Wii fans who were introduced to gaming through Wii Sports and Wii Fit. The Wii U is backwards compatible with Wii games and Wii hardware, too. In fact, many WIi U games, including Nintendo's New Super Mario Bros U, still use the Wii Remote for control.

Understanding how the Wii U works means looking at its brand new GamePad, Nintendo's new eShop, its play for living room dominance called Nintendo TVii, and, of course, a new generation of video games. So let's dive right in.