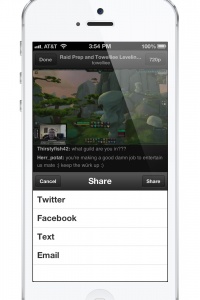 Twitch offers a software development kit (SDK) to help developers and gaming companies work Twitch support into their products. The hope is that this will help users to live-stream and share recorded gameplay easily -- sometimes with a single button click. Developers can work Twitch's chat capabilities directly into their games and provide metadata from the games back to Twitch to provide extra information to viewers or easier sorting by game version or mods. Twitch can even use the information to prompt a user to share highlights when something interesting happens in the game. Developers can incorporate leaderboards, contests and other community based content to increase the involvement of players, as well as collect analytics.

Per the Twitch site, these are games that have Click-to-Twitch capabilities built-in as of mid-2014:

"The Showdown Effect," a PC game by Paradox Interactive, was reportedly the first game with built-in Twitch support [source: Stark].

Game developers can use these tools to integrate Twitch broadcasting, viewing and chat into their games. They can include things like a list of all the available live streams of the game. And they can collect clips and data from Twitch to share with their communities.

People are coming up with inventive new ways to game using Twitch. An anonymous programmer in Australia set up the experimental TwitchPlaysPokemon channel in February 2014. It allowed a multitude of viewers to control and step through the Nintendo Gameboy game "Pokemon Red" by entering commands via chat. The channel is still going, running other Pokemon and Nintendo games. Users can enter the names of buttons (up, down, left, right, A or B), coordinates for touchscreen inputs and some other game-specific commands. It had as many as 120,000 simultaneous players at one point, and as of this writing has more than 276,000 followers and more than 62 million total views [sources: Magdaleno, Twitch Interactive].

Game development company Zombie Studios has even built that sort of Twitch chat interactivity right into its PC and PlayStation 4 game "Daylight," which allows viewers to affect the player's game via chat.