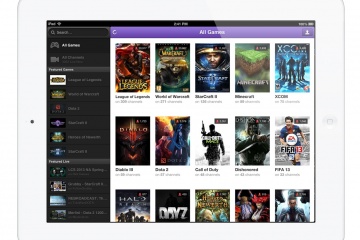 Viewers can watch Twitch on their mobiles devices. It’s shown here displayed on an iPad.
Image courtesy of Twitch

The basic hardware elements necessary for broadcasting to Twitch are a computer or gaming console running the right software, and a good broadband Internet connection. If you want to include video of yourself and audio commentary, a webcam and microphone (even just your built-in computer microphone) are necessary.

Want to play and share from your gaming computer? These are the recommended system specifications for broadcasting Twitch from a PC:

Recommended system specifications for broadcasting from a Mac are:

You may be still able to broadcast even if your system doesn't quite meet these standards, so if your current computer is fairly modern, give it a try before ditching it for a new model.

An easier (and possibly cheaper) alternative is a new gaming console. The latest generation gaming consoles -- Xbox One and PlayStation 4 -- both have built-in support for Twitch viewing and broadcasting.

PlayStation 4 was the first of the major consoles to provide Twitch broadcasting functionality, and PS4 users made up 20 percent of Twitch's broadcasters from late December 2013 to early January 2014 [source: Twitch Official Blog]. To share your gameplay, you simply hit the "Share" button on the DualShock 4 controller, select "Broadcast Gameplay," select your streaming service and channel (if you have more than one of either), make any settings adjustments you want and then select "Start Broadcasting." PS4 allows broadcasting through Twitch and Ustream, and if you don't yet have an account, it will prompt you to sign up for one when you select one of the services. PS4 does currently limit the amount of time you can broadcast your gameplay, and if you want to show video of yourself alongside the game, you will need PS4's optional PlayStation Camera peripheral.

Microsoft added Twitch broadcasting functionality to Xbox One in March 2014 via its Twitch app. It has some extra features, including the ability to view any Twitch stream from any game platform, not just other Xbox streams, and the ability to archive your game broadcasts. You just need to download the Twitch app to get started. To broadcast, you say the voice command, "Xbox, broadcast," or go to the Twitch app via your controller and launch your broadcast from there. You can display video of yourself via Kinect, which incorporates a camera and comes standard with Xbox One. You can even pull up the Twitch app in Snap Mode while you're broadcasting to see your broadcast from the viewers' point of view or browse for other channels. Viewers can chat and even request to join the broadcaster's party. Xbox 360 also has a Twitch app that allows users to browse and watch the top 300 Twitch channels, but not to broadcast.

To broadcast streams from older consoles, you can use a capture card to connect your console to your PC, using whatever cables your equipment requires. Some capture cards mentioned in Twitch Support Center articles include:

Their compatibility with various broadcasting software is also mentioned in the support posts for each one. Read on to find out more about software that you can use to stream to your Twitch channel.