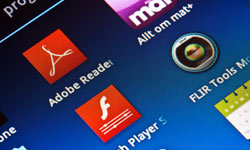 Adobe Flash Player is required to view Flash content, a proprietary technology used on many interactive Web sites, but don't expect to see its icon on your iPad or iPhone.
©iStockphoto.com/Remus Eserblom

Flash is a proprietary media file format created using Adobe Flash software. To view Flash content, your Web browser must include a plug-in provided by Adobe. Flash is supported in most Web browsers, but it isn't available on any Apple iOS device, including the iPad, iPhone or iPod touch.

The myth behind Apple's decision is that the company just hates Flash. This started when Apple released its first iPhone without supporting Flash. Ongoing updates to the Apple iOS platform signaled that Apple had no intention of supporting Flash on its mobile devices. It seemed as if Apple was waging a silent war against Adobe. Bitterness increased in the media, from both industry critics and Adobe, following the iPad's announcement in January 2010 [source: Dilger].

However, in April 2010, co-founder and then-CEO Steve Jobs published his "Thoughts on Flash" statement as an official response to public criticism. This set the record straight on why Apple chose not to support Flash in Apple iOS. Jobs stated that while its own products are closed and proprietary, Apple felt that Web standards should be open. This means supporting standards like HTML5, CSS and JavaScript and avoiding the proprietary technology of Flash [source: Jobs].

Jobs also dispelled the assumption that the Web was unusable without Flash support. He reminded readers that while there is a lot of Flash content on the Web, much of that content is also available in H.264 format, which is supported on Apple iOS. Rounding out his explanation, Jobs also echoed sentiments from across the tech industry indicating an increasing lack of security and reliability in Flash technology [source: Jobs].

In short, though Apple clearly doesn't want to support Flash in Apple iOS, its reasons stemmed from business decisions rather than personal opinions. Coincidentally, the big tech buzz in November 2011 was that the silent war had ended with a victory for Apple. That's when Adobe announced that it was halting development of its Flash Player software for mobile browsers, effectively surrendering interactive mobile Web experiences to the newer and increasingly popular HTML5 technology [source: Finkle].