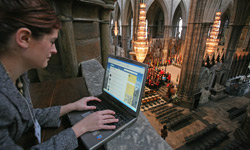 Some call it an online social networking site, microblogging or maybe even public text messaging -- it can't be pinned down because there's really nothing else like it. Twitter is a free way for friends and strangers to send and receive short messages (140 characters max) via the Twitter Web site, on a mobile device or with instant messaging. Users are called "twitterers" and the messages they send are called "tweets."

More people are using Twitter than you may think. The most recent stats from Nielsen Online report Twitter usage grew 1,382 percent from February 2008 to February 2009, and more than 7 million new U.S. users signed up in February alone [source: Ostrow]. Even with such impressive numbers, Twitter's audience retention rate is at about 40 percent [source: Wayne].

With such interest in Twitter, it's no surprise there are various myths swirling around about it. Who's perpetuating them? The media, twitterers, maybe even you. We're going to look at five of the big ones here.