The iPad is Just a Big iPod Touch 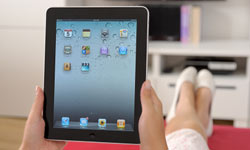 The iPad is wildly popular, but is it just a large-screen iPod Touch?
©iStockphoto.com/Yunus Arakon

Following the iPad launch, critics looked beyond the dazzling demos to see what the device was all about [source: Fox and Albro]. Their conclusion? It's just a larger version of the iPod Touch.

On the surface, this certainly seems true. Both devices run the Apple iOS and, thus, can run any of the apps available from the App Store. The look and feel of the operating system is identical on each devices, as is the sleek, minimalistic look of the silver edging, black frame and single button. Between the two, the iPad gives you the larger screen for an easier experience reading e-books or watching videos.

The devices do have some important differences on the inside, though. First, the iPad can function as a larger iPhone, too, if you purchase a model that works on a supporting 3G mobile network (AT&T and Verizon in the U.S.). This is useful for people who want the convenience of wireless Internet when there isn't a convenient WiFi network available.

In addition to the 3G option, the iPad features a 1 GHz dual-core processor. This means it will better support the apps you run, especially for tasks like watching videos or playing graphic-intensive games.

Speaking of proprietary adapters, the next myth separates fact from fiction when it comes to whether you're better off buying Apple accessories for your computer.