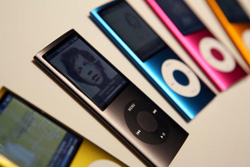 Minimalism is a hallmark of Apple's design philosophy, as indicated by the iPod.
Justin Sullivan/Getty Images

This is a myth perpetuated by Apple's talented public relations department and echoed by Apple fans around the world. Apple does not quibble with the fact that, on average, Apple products cost more than similar products made by other manufacturers. Instead, it argues that its products are so superior that they're worth the price hike.

Compare the minimalist perfection of the iPod to the clunky MP3 players that came before it. Consider the intuitive touch-screen magic of the iPhone and the baffling menus on other smart phones. Remember when you saw your first iMac? It knocked those beige boxes right out of the park, didn't it?

In 2009, given a MacBook Pro and a Dell laptop with nearly the same hardware specifications, the Mac cost $675 more [source: Wildstrom]. Opinions vary on whether it's worth it to pay more than 50 percent more for the MacBook to get your hands on the OS X operating system. Microsoft calls this the "Apple Tax." Apple calls it just another myth [source: Fried].

Apple's prices have also prompted creative hackers to invent their own Mac knock-offs. For example, PC hackers at Hackintosh.com maintain steps on how to run Mac OS X on cheaper PC hardware, even though OS X is not supported on hardware other than a Mac. For our next myth, we'll look at why these efforts to tweak or clone Apple software isn't as easy as it might seem.