Macs and Windows Computers are Incompatible 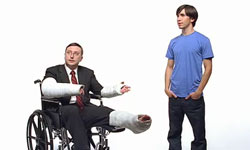 One of Apple's biggest marks on pop culture was its "Get a Mac" ad campaign featuring actors John Hodgman as PC and Justin Long as Mac. The "Mac versus PC" TV commercials prompted both serious debates and numerous parodies. With all that hype, it's easy to assume that Macs and Windows PCs are so different as to be utterly incompatible.

It's true that Macs and Windows PCs run on different operating systems. Macs use the UNIX-based OS X while Windows machines use, well, Windows. But that doesn't mean that the two operating systems speak completely different languages.

For starters, just about every common software application runs on both Macs and Windows PCs. That includes Microsoft Office (Word, Excel, PowerPoint and Outlook), most major Web browsers (Internet Explorer, Firefox, Chrome and Safari), Adobe Photoshop and even iTunes. This means that Mac and PC users can share almost every type of document or file. What's more, Macs and PCs can easily run on the same home or corporate network.

For users, the major difference between Mac and Windows comes down to cosmetics and semantics. A long-time Windows users might look at a Mac and ask, "Where's the Start menu? Why don't applications close when I click the X? What the heck is a Finder?" One other notable difference is games, with some PC games appearing for Mac after the title's initial release, or not at all.

Part of the confusion comes from the different ways that the two systems approach menus. On a Mac, the main application menu is always on the top of the screen, separate from the active application windows themselves. So, even when you close your browser windows on a Mac, the application you were using is still running. You have to select "Quit" to close the application completely.

The great thing is you don't have to choose between Macs and PCs anymore: Apple offers an application called Boot Camp that lets you run Windows on your Mac. When you use Boot Camp, you can select whether to switch between OS X and Windows when you reboot the computer. Apple ensures that Windows has all the hardware drivers it needs for the Mac you're using, though it does limit you to the 32-bit version of Windows even if you have 64-bit Mac hardware.

Now, let's look at a myth that could hit you right in the wallet.