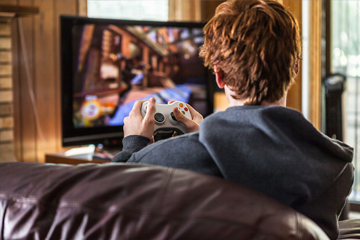 A quick-time event (or QTE) is a concept designed to blur the line between a video game's cinematic and interactive elements.
heshphoto/Getty Images

So let's set up a scenario. You're playing a game in which you have to, say, save the planet using only evidence-based medicine. You might have a command that allows you to throw research papers at people, which you'd probably have to use over and over throughout the game. In that same game, there might be a sequence — built mainly for the pleasure of the developers and designers to show off their work — where you break into a vault in which a whole bunch of clinical trials are taking place. Instead of just showing you a sequence where the character busts the lock, opens the door, grabs the test results and escapes through a window, a quick-time event might prompt you to press the space bar to bust the lock, press enter to open the door, press down to grab the goods and press the space bar again to climb out the window.

The quick-time event is often maligned in the gaming community, because it can often feel like a tacked-on way to get you to interact with a scene that may not need — or warrant — interaction. (A cringe-worthy example in "Call of Duty: Advanced Warfare" cheerfully asks you to "Press F to pay respects" at a soldier's tomb [source: Cross]. Classy!) But QTEs originally came to be in the age of games like "Dragon's Lair," which were more like animated movies.

QTEs became popular with a game called "Shenmue," but do note that the original term was "quick timer event," which is different [source: Hamilton]. (OK, so it's not that different, and the term "quick-time event" is now pretty much universal.) The point being: "Shenmue" started using these little QTEs for scenes, and it caught on across all sorts of other games.

Of course, some games use QTEs in a more sophisticated way to really integrate a player. In our strange little game involving evidence-based medicine, it might mean that the command to open the door involves spinning the joystick like a little knob, instead of just quickly pressing enter. But there's a reason why people refer to QTEs as "press X to not die." They can feel a little too reliant on simple reflex responses and not on well-designed gameplay. The ideal QTE might be one that feels a bit more organic to a game, without taking you out of your mission [source: Grayson].

How are video games regulated in the U.S.?
How Twitch Works
Halo 2 First Hour