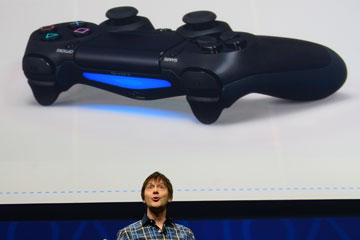 While Sony didn’t show the console itself at its February 2013 press conference, the company did show off the new DualShock 4 controller.
© EMMANUEL DUNAND/AFP/Getty Images

The PS4 also ships with a Blu-ray optical drive that can read at up to 27MBps (megabytes per second), which is abound three times faster than the PS3's. Of course, there are plenty of connectivity options, from Ethernet to WiFi and Bluetooth. There will be integrated USB 3.0 ports, too, although as of March 2013, we don't know how many.

Each PS4 comes with an upgraded PlayStation Eye. The Eye (which looks a bit like a sleek Web cam that's affixed to the top of your TV) now has stereo vision via its two 1280 by 800 resolution cameras. Like the Microsoft Kinect, the Eye can track your motions and gestures for game input. It can also record video with one camera and track motion with the other.

The Eye has four built-in microphones, which you'll be able to use for voice commands. It's also tied to facial recognition software that helps you log into the system without the need for password entry.

The new controller, called the DualShock 4, connects to the console using Bluetooth, and features the same blend of a gamepad with two joysticks, just like the previous version. But the new version also has a touchpad that you can use for input, as well as a multi-colored light bar that can be programmed to player specific colors or alert you to in-game cues. You'll receive signals and updates through the integrated speaker as well.

The DualShock 4 controller has a 3.5 jack for the included headset. It's also equipped with a microUSB port.

Specs aside, the PS4 has some nifty new tricks on the software side, too. Keep reading and you'll see how Sony hopes to hook both new and veteran gamers.