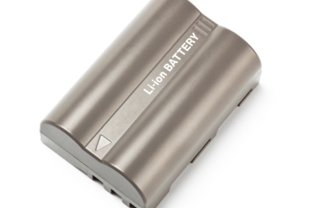 Lithium-ion batteries are incredibly popular these days. You can find them in laptops, PDAs, cell phones and iPods. They're so common because, pound for pound, they're some of the most energetic rechargeable batteries available.

­ Lithium-ion batteries have also been in the news lately. That’s because these batteries have the ability to burst into flames occasionally. It's not very common — just two or three battery packs per million have a problem — but when it happens, it's extreme. In some situations, the failure rate can rise, and when that happens you end up with a worldwide battery recall that can cost manufacturers millions of dollars.

So the question is, what makes these batteries so energetic and so popular? How do they burst into flame? And is there anything you can do to prevent the problem or help your batteries last longer? In this article, we'll answer these questions and more.

Lithium-ion batteries are popular because they have a number of important advantages over competing technologies:

That is not to say that lithium-ion batteries are flawless. They have a few disadvantages as well:

Many of these characteristics can be understood by looking at the chemistry inside a lithium-ion cell. We'll look at this next. ­ 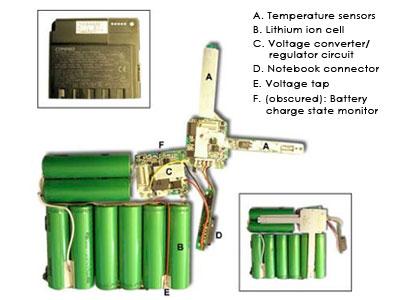 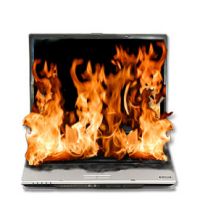 Several news reports in the past six months describe laptops with lithium-ion batteries that caught on fire.

Lithium-ion battery packs are expensive, so if you want to make yours to last longer, here are some things to keep in mind:

Now that we know how to keep lithium-ion batteries working longer, let's look at why they can explode.

If the battery gets hot enough to ignite the electrolyte, you are going to get a fire. There are video clips and photos on the Web that show just how serious these fires can be. The CBC article,"Summer of the Exploding Laptop," rounds up several of these incidents.

When a fire like this happens, it is usually caused by an internal short in the battery. Recall from the previous section that lithium-ion cells contain a separator sheet that keeps the positive and negative electrodes apart. If that sheet gets punctured and the electrodes touch, the battery heats up very quickly. You may have experienced the kind of heat a battery can produce if you have ever put a normal 9-volt battery in your pocket. If a coin shorts across the two terminals, the battery gets quite hot.

In a separator failure, that same kind of short happens inside the lithium-ion battery. Since lithium-ion batteries are so energetic, they get very hot. The heat causes the battery to vent the organic solvent used as an electrolyte, and the heat (or a nearby spark) can light it. Once that happens inside one of the cells, the heat of the fire cascades to the other cells and the whole pack goes up in flames.

It is important to note that fires are very rare. Still, it only takes a couple of fires and a little media coverage to prompt a recall.

To learn more about lithium-ion batteries and related topics, check out the links on the next page.

Was there an error in the CERN team's timing of faster-than-light neutrinos?
How Global Cell Phones Work
How to Create Black-and-White Photographs With Color Accents