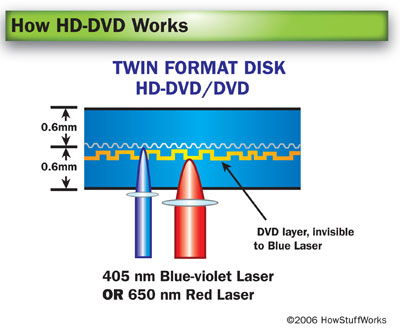 The blue laser sees through the outer layer, skipping straight to the high-definition content.

If you decided to buy an HD-DVD player the first day they hit the market, you'd still be able to play your DVDs on it. On the other hand, if you bought a new movie on HD-DVD, it wouldn't play in your old DVD player. Since an HD-DVD is exactly the same size and shape as a regular DVD, it's pretty easy to make new players that can handle both -- they just need a laser pickup that can read either format. The Toshiba HD-DVD player brought to market in April 2006 can read DVDs, HD-DVDs and CDs.

Even if HD-DVDs had gained widespread use, you would still have been able to buy DVDs -- the majority of homes in the United States don't have HDTVs, and there's no point in upgrading to HD-DVD without one. In addition, HD-DVDs can store regular and high-definition content on the same disc. Twin format discs have two layers -- a DVD layer on top uses a red laser, and an HD-DVD layer on the bottom uses a blue laser. The outer layer is transparent to the blue laser.

With either option, you could buy one disc that would play in both DVD and HD-DVD players. If these discs had become available in stores, they would have been a good choice if you planned to upgrade to high-definition at some point in the future. Twin or combination discs would also have been useful for libraries and movie rental stores, since not everyone will be ready to upgrade their player right away. With the death of the HD-DVD format (more on that later), consumers must pin their hopes on a Blu-ray/DVD hybrid player.

The HD-DVD format didn't have a lock on the high definition home video market. For a while, it competed with another format called Blu-ray. The war between HD-DVD and Blu-ray split the home video industry into two camps, each betting the other side's format would crumple. But how were the two formats different to begin with? Keep reading to find out.

Regular DVDs generally have enough resolution to look good on 480-line analog displays, which isn't sufficient for new big-screen sets. The Toshiba HD-DVD player can automatically up-convert regular DVDs to accommodate 720- or 1080-line displays. The converted picture won't have all the resolution of an HD-DVD, but it will be better than an analog signal from a DVD player.