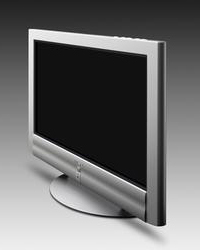 For the past 75 years, the vast majority of televisions have been built around the same technology: the cathode ray tube (CRT). In a CRT television, a gun fires a beam of electrons (negatively-charged particles) inside a large glass tube. The electrons excite phosphor atoms along the wide end of the tube (the screen), which causes the phosphor atoms to light up. The television image is produced by lighting up different areas of the phosphor coating with different colors at different intensities (see How Televisions Work for a detailed explanation).

Cathode ray tubes produce crisp, vibrant images, but they do have a serious drawback: They are bulky. In order to increase the screen width in a CRT set, you also have to increase the length of the tube (to give the scanning electron gun room to reach all parts of the screen). Consequently, any big-screen CRT television is going to weigh a ton and take up a sizable chunk of a room.

A new alternative has popped up on store shelves: the plasma flat panel display. These televisions have wide screens, comparable to the largest CRT sets, but they are only about 6 inches (15 cm) thick. In this article, we'll see how these sets do so much in such a small space.

If you've read How Television Works, then you understand the basic idea of a standard television or monitor. Based on the information in a video signal, the television lights up thousands of tiny dots (called pixels) with a high-energy beam of electrons. In most systems, there are three pixel colors -- red, green and blue -- which are evenly distributed on the screen. By combining these colors in different proportions, the television can produce the entire color spectrum.