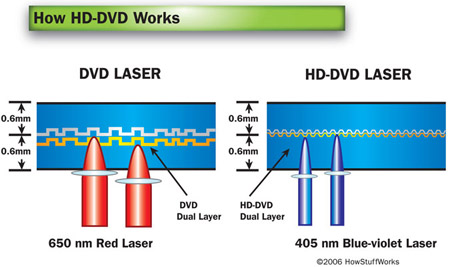 An HD-DVD uses the same principles -- it contains a bumpy layer that reflects light from a laser to a sensor, creating a digital signal. HD-DVDs are even exactly the same size as DVDs (120 millimeters in diameter and 1.2 millimeters thick). But three important differences allow them to hold quite a bit more information than DVDs:

The color of the laser may seem like a trivial change to make, but the shorter wavelength of the blue-violet laser is what allows HD-DVD's pits to be smaller and arranged closer together. In other words, it allows the disc to have a much narrower track pitch. Regular DVDs have a track pitch of 0.74 micrometers, and HD-DVDs have a track pitch of 0.40 micrometers. You can imagine this as the difference between writing with a magic marker and a fine-tipped pen.

The other big difference between DVDs and HD-DVDs involves how the information on the disc is compressed. Most DVDs use MPEG-2 compression. HD-DVDs can use MPEG-2, but they typically use the more efficient MPEG-4, which allows higher video quality with a smaller file size. HD-DVDs can also use VC-1 (or Windows Media) compression.

Finally, because of general improvements in the technology, an HD-DVD player can read information from the disc and deliver it to the TV about three times as fast as a DVD player can. It can also send the signal to an HDTV digitally using a High Definition Multimedia Interface (HDMI), preventing the quality loss that conversion to analog causes.

One of the first questions people ask about HD-DVD (besides "Is it better than Blu-ray?") is whether their old DVDs are about to become obsolete. Let's take a look at what is likely to happen with players and discs as people upgrade.

Wondering what the difference is between standard and high definition? Standard definition (SD) uses 525 lines of pixels from top to bottom. High definition (HD) uses up to 1125 lines. Not all of these lines are visible on the screen, but they're included as part of the signal.