by Charles Woodworth
NEXT PAGE 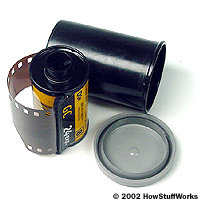 People have been using camera and film for more than ­100 years, both for still phot­ography and movies. There is something magical about the process -- humans are visual creatures, and a picture really does paint a thousand words for us!

Despite its long history, film remains the best way to capture still and moving pictures because of its incredible ability to record detail in a very stable form. In this article, you'll learn all about how film works, both inside your camera and when it is developed, so you can understand exactly what is going on!