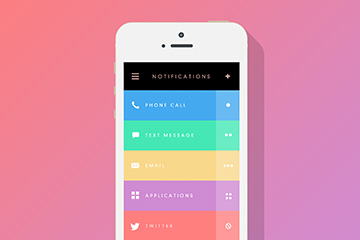 Like all smart rings, the Ringly works with your smart phone. Its app assigns different colors to different functions.
Ringly

Here's where things get a little weird. Using a smart ring as a hands-free notification system that pairs with your smartphone seems reasonable enough, but do we really need to remotely control every device in our lives with our pointer finger?

The Japanese company Logbar seems to think so. In 2015, it started selling the Ring ZERO, a device that allows its user to control any number of Bluetooth-enabled devices with a series of finger-based gestures. To turn on the lights, you point at the ceiling and draw a light bulb in the air. When you take a picture with your phone, you can flick your finger upward to upload it to Facebook. Draw a bird in the air to send a Tweet or a music note to play a song.

While some people might think it's fun to play charades with their iPhone, the Ring ZERO is more of a parlor trick — or the awkward first draft of a future technology — than a truly useful device. Is it really any easier to draw a picture of a camera in the air than to click the camera icon on your phone? Plus, most smart rings are big and clunky, probably because of all of the motion detection hardware stuffed inside. And you usually have to take them off when you wash your hands [source: Campbell-Dollaghan].

If you have a hard time remembering all of the gestures required by Ring ZERO, good luck with Fin, a smart ring worn on your thumb. This device — no release date has been announced, and may never be — works by tapping the thumb against your other fingers. To skip to the next song on your iPod, drag your thumb across your other digits. To lower the volume on the TV, drag your thumb slowly down your pointer finger. To use Fin as a gaming controller, point your fingers at the screen and cock your thumb to shoot!

One smart ring remote control that actually exists is the NFC Ring. NFC stands for near-field communication, a radio protocol similar to radio-frequency identification (RFID) tags [source: Donovan]. The NFC Ring can communicate with any other device containing an NFC chip. For example, you can unlock your smartphone or tablet simply by sliding the ring along the back of the device. You can also unlock an NFC-enabled door with a tap of the ring.

If you're excited about the future of smart rings, we have lots more information about wearable technology below.

We are living in the golden age of vaporware. Thanks to crowdfunding websites like Kickstarter and Indiegogo, aspiring entrepreneurs can raise staggering amounts of cash with nothing more than a great promo video featuring slick digital renderings of a product that doesn't yet exist. Unlike a venture capitalist, who conducts market research before investing, and expects to see prototypes and works in progress from the company, the typical Kickstarter investor just wants first dibs on a groovy gadget that may never really be a viable product. Researching this article, I found tons of breathless blog posts about smart rings, but few contained any hard facts beyond the companies' own press releases. A visit to the Fin Facebook page shows months between posts and several anxious fans asking for updates and possible release dates, with no replies. I'm all for the democratization of startup funding, but with it comes the risk of more fizzled gadget fantasies.