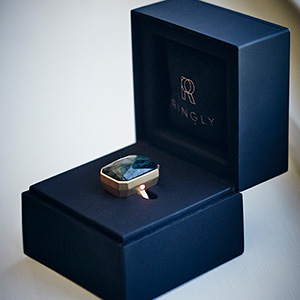 The Ringly's ring box doubles as a charger for the smart ring when plugged into a USB outlet.
Ringly

One of the few smart rings that has moved beyond the prototype stage is Ringly, a fashionable gem of a device whose sole purpose is to deliver notifications from a paired smartphone. A woman wearing Ringly — the initial gemstone designs are marketed to women — can leave her phone in her purse and still feel connected to her most important contacts and social network feeds.

Using the Ringly app, users can match one vibration pattern to text messages, for example, and another to incoming phone calls. Since not all calls are equally important, the user can further customize Ringly to blink red when the text is from her boyfriend or green when the phone call is from work.

The MOTA DOI SmartRing is a sleek device initially offered in bling-free white or black. Like Ringly, the SmartRing pairs with a smartphone and vibrates when the user receives messages or updates from his or her social media feeds.

Where the SmartRing differs from Ringly — and almost all other smart rings — is that it actually has a tiny touchscreen display. Along with a vibration, the ring displays an icon identifying the source of the notification. It can even display a short message, stock-ticker style, like a tweet or a calendar alert. Swipe right or left to toggle through your notifications. Its website says the product will also be available later in 2015.

Key to using both Ringly and the SmartRing is the intuitiveness of the devices' apps. The SmartRing's app isn't yet available, as of June 2015. But the Ringly app, free on iTunes and Google Play, is getting solid reviews. Under the "notifications" tab, you can assign different vibrations and colors to a long list of smartphone apps and functions: text messages, phone calls, Twitter, Facebook, Instagram, even Uber, the car service.