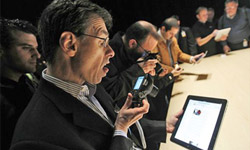 Sometimes it seems like real gadgets are catching up to what we see in science fiction, but we still have a few imaginary gadgets on our wish list.
AP Photo/Marcio Jose Sanchez

Science fiction can be a powerful genre. In books like "1984," "Brave New World" and "Fahrenheit 451," we can consider the dangers we face if we put too much power in the hands of the government. These books also stress the importance of individuality and critical thinking. While the setting may be futuristic and even fantastic, the themes are relevant to how we live our lives. Don't dismiss a tale just because it has robots and rockets in it -- there may be more going on under the surface of the story.

But apart from deep social commentary, science fiction has given us other gifts: amazing inventions that we'd love to possess. Some gadgets from science fiction became reality. "Star Trek" introduced the concept of a universal translator -- a gadget capable of making communication possible across language barriers. Today, you can use a smartphone and Google Translate to have a conversation with someone else even if you don't share a common language. There are thousands of examples of real-world gadgets and inventions that were once just the stuff of dreams.

But not all gizmos and doodads from sci-fi are available at the local retail store. We're going to take a look at 10 gadgets introduced in sci-fi that we're just dying to get our hands on.